The Long Truce: How Toleration Made the World Safe for Power and Profit 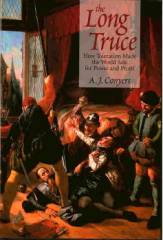 When there is a conflict between church and state, who wins? The answer is easy in modern America—the state. Who cares what any church has to say about anything? After all, truth is relative, and churches are only talking about private personal opinions, nothing that affects anyone else. At least that's what the large majority of Americans think.

Religious ethical opinions carried no weight in the Terry Schiavo case. The courts made their decisions with no regard to the sanctity of life or church teachings. The same is true in regard to abortion, homosexual marriage, and other hot button issues. The church no longer carries moral authority beyond its ability to convince individuals regarding their own actions and beliefs because of our modern doctrine of toleration.

This toleration, a corruption of the original meaning of the word, is really a defense of Relativism—there are no absolute truths, so all beliefs are equally "true." Consequently, we cannot criticize or judge another's belief or actions based on their beliefs. This idea of toleration, however, plays a much larger role than most people realize.

In The Long Truce, A. J. Conyers does a masterful job of showing how the modern concept of toleration has paralleled the growth of the large, centralized political states in the Western world. In the first chapter, Conyers explains his thesis: "It is no coincidence…that the idea of toleration became so prominent at the same time that these large nation-states were coming into their own." He continues, "When the nation must be mobilized to meet a crisis, or when the state has assumed both the right and the duty to see that national life functions well, the kinds of distinctions that make up the fabric of a society [referring to loyalties to church, family, or other social groups] tend to obstruct the efficiency needed for effective action. The doctrine of toleration…neutralizes those inconvenient distinctions, eroding their capacity to draw groups together for purposes other than those of the central government" (p. 7).

Conyers shows how historical circumstances of the seventeenth century, particularly religious wars, led Thomas Hobbes, Pierre Bayle, John Locke and others philosophical writers of the Enlightenment to advance toleration as a means of achieving political peace.

However, that peace was bought at a price, and the peace was never really accomplished. The price paid was the authority--whether physical, spiritual, or intellectual—of all sub-groups within the nation state, but most particularly churches. Any group's claim to truth could no longer trump the goals of the state. Truth had to become relative, an idea that took up until our present day to fully permeate the culture.

Conyers explains why people have so readily accepted the growing power of the state and simultaneous loosening of bonds within societal groups. He shows how danger, political or financial uncertainty, or oppression make strong-centralized government an appealing option.

Conyers brings his Christian religious perspective to bear throughout the book, making this book particularly useful for Christians interested in thinking through the relationships between church and state.

While this is not light reading, I rate this one of the most important books I have read on politics, philosophy, and religion.

Note: you might want to read John Locke's A Letter Concerning Toleration (1689) alongside this book. You can access it at http://www.constitution.org/jl/tolerati.htm.

The Long Truce: How Toleration Made the World Safe for Power and Profit