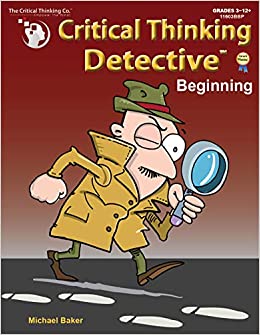 The Critical Thinking Detective™ series includes books under three strands: critical thinking, math, and vocabulary. This review focuses on the critical thinking strand that consists of three books titled Critical Thinking Detective with the subtitles Beginning, Book 1, and Book 2, respectively. Beginning is for grades three through twelve, and Book 1 and Book 2 are both for grades four through twelve.

In all three books, each lesson is set up on one page showing four possible culprits for a crime or misadventure. Students need to read a few paragraphs about the situation that usually include the statements of observers and some data points. Students then read brief statements from each of the suspects to gain further information. Students have to piece together information from the various sources to eliminate the three innocent parties and identify the one that is guilty.

Students are told to assume that the facts related by a witness or suspect are true statements. However, some statements are merely opinions, and students need to distinguish between fact and opinion to weigh the value of the statements.

The lessons remind me of the logic grid puzzles where you are given various bits of information, and the grid helps you keep track of your observations and conclusions. In this case, there are no grids, and students need to keep track of information mentally or with their own notes as they deduce the correct answer.

Students do not know immediately which pieces of information are most critical, so they have to read carefully and reread to pick up details they missed the first time around.

The other two books also number the sentences in the lesson, but the activity pages are mostly blank forms that require students to write out their explanations in complete sentences regarding the innocence or guilt of each suspect. Students have to identify the numbers of the sentences they use as evidence.

Each book has twelve lessons, so a student could complete two or all three books in one year using one lesson per week. These books are available in print or as ebooks (in a proprietary format only for Windows systems that allows you to read and print the pages). Answer keys with full explanations are at the back of each book.

Most students (as well as adults) are likely to experience the lessons in these books as entertaining puzzles to solve. Students can use these independently or they can read and discuss them with others as they sort out the clues together.