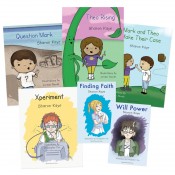 The Royal Fireworks Philosophy Curriculum consists of six levels at this point, Levels A through F, although more courses will be added in the future. The six courses are titled: Question Mark, Theo Rising, Mark and Theo Make Their Case, Xperiment, Finding Faith, and Will Power. In spite of the title of the fifth course, this is a secular series that does not direct students toward any specific beliefs, theistic or otherwise.

The goal of the series is to challenge students to think like philosophers as they ponder various situations and dilemmas, although the fifth course does raise the idea of faith and arguments for faith in God. Along the way students will become familiar with some philosophers and their ideas to one degree or another.

Levels A through F are intended for children in kindergarten through fifth grade, but the author probably has in mind gifted students. The content and the level of thinking required suggest an older audience to me. So I appreciate the A through F identifications since I would probably use these myself with students in about third through eighth grade, and maybe even into high school.

You begin each lesson with a “chapter” of the story. While each book tells a complete story, the stories are presented in segments, with a lesson in the teacher’s manual or guidebook for each segment. The lessons for the teacher summarize the piece of the story in that segment then present a few paragraphs for the teacher on the philosophical background and basis of the story. Discussion questions that follow next are based on Bloom’s Taxonomy. In all except Level A, the questions within each lesson segment are presented following Bloom’s order of increasingly challenging levels of thinking. Questions are even labeled with Bloom’s Taxonomy identifiers: Remembering, Understanding, Applying, Analyzing, Evaluating, and Creating. After the discussion questions, lessons will often include an activity suggestion.

For the first three levels, full-color, heavily-illustrated storybooks look like children’s picture books with a relatively small amount of text accompanying the illustrations—the amount of text increases gradually from book to book. However, the content of the text is nothing like you will find in children’s picture books. Also, there are over 100 pages in each book, so there is plenty of time to get into deep ideas even with brief amounts of text.

The first course, Level A: Question Mark, begins with a very simplified idea based on Plato’s allegory of the cave. A little boy named Mark makes shadow puppets that come alive, and the course uses this as a sort of allegory to address the nature of reality.

While Level A introduces fundamental questions of philosophy—questions such as, Who am I? Why am I here? and What is reality? —Level B explores ideas raised by Presocratic philosophers. Here students ponder the nature of the universe and especially the question, “What is the most real thing that exists?” The last part of this book explores the concept of using criteria for evaluating various theories, and these are applied to the theories answering the question posed about the most real thing.

Level C presents some of the ideas of Plato and Aristotle, often placing them in opposition to one another.

I realize that this sounds like heady stuff. It is, but it is presented through fantastical stories. For example, in Level C: Mark and Theo Make Their Case, the ideas are presented through a story of two children, an older boy who holds creative power by drawing and erasing elements of the story, a talking suitcase, and birds.

For the first three levels, activity suggestions in the teacher manuals might include drawing, discussion, brainstorming, playing a game, researching, watching a video, or some other creative activity. But all of these activities are thought provoking rather than busy work or crafts. For example, page 18 of the teacher’s manual for Level A says, “Draw a picture of a physically impossible monster. What makes it impossible as opposed to just unreal?” Page 20 of Level B says, “The students are given five different choices for a school pet: an elephant, a tortoise, a cheetah, an orangutan, and an alligator. As a group, they must come up with several criteria to decide which animal would make the best pet.” The activity on page 14 of Level C reads: “Look in the news, and notice stories in which someone has done something bad or wrong. Determine whether you think ignorance was the underlying cause.” A number of the activity suggestions assume a group class, but many can be easily adapted for one or two students.

The storybooks for Levels D, E, and F have significantly more text, black-and-white illustrations, and fewer pages. While illustrations dominated in the first three books, text is primary in the next three. In some ways, the content of these next three books seems a little less abstract than the first three. This is probably because they bring up topics most people think about at one time or another.

Level D: Xperiment delves into questions about political theory and forms of government. It also discusses theories about the nature of man in the context of government. In Level E: Finding Faith, Faith is the name of a runaway puppy that the young people are trying to find. But the course is also about the arguments for and against the existence of God. While the young people in the story discuss religious beliefs from atheist, Christian, and Buddhist perspectives, the philosophical arguments presented are those of Augustine, Anselm, Aquinas, Pascal, Descartes, Kierkegaard, and William James. While the book doesn’t promote theism, it does seem to leave students with the challenge of Pascal’s Wager. Level F: Will Power gets into the challenging topic of free will versus determinism. Philosophical ideas are drawn primarily from the Ancient Greek Stoics and Epicureans: Marcus Aurelius, Seneca, Epicurus, and Lucretius.

The teacher manuals and guidebooks include very helpful background information on philosophers from past and present within every lesson, delving into their ideas further than do the storybooks. For example, the guidebook for Will Power includes information about Jean-Paul Sartre and existentialism as well as about Simone de Beauvoir who wrote about the concept of ambiguity. It also makes a connection between the ideas of Marcus Aurelius and Henry David Thoreau. The publisher tells me that they intend to incorporate an abbreviated version of this background material at the back of the storybooks in the near future for those students who might be interested.

Suggested activities for Levels D through F differ from those in the earlier levels. Finding Faith encourages students to explore meditation with reference to Zen forms of meditation. It also recommends a couple of YouTube videos that present hypotheses about what happened before the Big Bang with no theistic ideas included.  Videos recommended for the other levels include other YouTube and TED Talk videos plus websites. Parents should probably screen videos and sites before sending students to view them.

Discussion will likely take more time than the reading as you work through these courses. The questions must be used for discussion rather than for students to write out their responses. While parents or teachers can just present the questions without reading the background information, everyone is likely to benefit if they add more information drawn from that background material as the discussion progresses. Parents and teachers also need to be familiar with the stories themselves for the discussions. Prep time invested by the parent or teacher is likely to be a critical element for using these courses successfully.

You need not use all of the books, but you should use those you do in the given sequence. Starting with the first book is fine, but I think starting with Level D is also a great place to jump into the sequence. The publisher tells me that there will eventually be 13 levels in the series which can take a student from kindergarten through twelfth grade using one course per year.

You can view free samples of the storybooks (about 20 pages from each book) and a sample lesson from each of the teacher manuals  from the publisher’s website so that you can get a better idea of what the courses are like before buying.

The Royal Fireworks Philosophy Curriculum is very cleverly written. I like the way author Sharon Kaye interweaves the names of famous philosophers as characters in the story in a way that will help students grasp their ideas. The entire series helps students wrestle with profound ideas, helping them to learn to question and ponder important life questions. The non-directive nature of the course might bother some parents or teachers, and they might be tempted to be overly directive in the discussions. In a secular classroom, the teacher needs to be objective about points of view, but even in a homeschooling family or maybe in some small group classes, you should be careful to keep the discussion broad so that students can become familiar with other philosophical ideas, even those with which you might disagree. This is how they learn to think.  However, in a family setting or small group where there is a common religious perspective, presenting the parents or teachers point of view from time to time for comparison or contrast might be helpful. Alternatively, having a discussion about your own beliefs might be a great way to conclude each course.