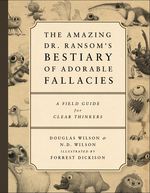 The Amazing Dr. Ransom’s Bestiary of Adorable Fallacies: A Field Guide for Clear Thinkers should be labeled with two prerequisites: potential readers should have a larger than average vocabulary and they should already have been introduced to logical fallacies such as ad hominem, special pleading, and post hoc ergo propter hoc. Those who meet the prerequisites should find the book vastly entertaining, while others might be overwhelmed by the verbal meandering, historical and geographical allusions, advanced vocabulary, and relatively brief treatment of each type of fallacy.

The book introduces fifty fallacies, grouping them into fallacies of distraction, fallacies of ambiguity, fallacies of form, and millennial fallacies (frequently attributable to the millennial generation). Most fallacies bear familiar names and show up on Wikipedia’s “List of Fallacies.” https://en.wikipedia.org/wiki/List_of_fallacies However, I suspect that a few of them might have been concocted by the authors. While I cannot speak with certainty regarding academic recognition of those few unfamiliarly-named fallacies, I do know for certain that the bestiary that accompanies the fallacies is entirely fictional.

The authors, along with artist Forrest Dickison, have personified each fallacy as an “adorable beast” that will “rot your thought” if you allow it to. This book is a guide to help the wary thinker spot the beasts and wrangle them into either submission or oblivion. Each beast is illustrated in its adorable form as well as its unleashed-attack form. Each one is also given a name. (A deck of flashcards was created to help students master the names and character of each of the fifty fallacies.) For example, the ad hominem fallacy, also known as “poisoning the well,” is represented by a beast named the Pit Spitter. The flashcard shows this information along with the two illustrations of the Pit Spitter and the fallacies definition: “Attacks an opponent’s character when character is irrelevant to the argument.”

The “lessons” are written in the first person by Dr. Ransom, a well-traveled gentleman whose life has extended across three centuries because of “spider milk lotion” he developed on a trip to the great Zambeezi River. However, Dr. Ransom is not your typical storyteller. With this book, showing is far better than telling, so with the publisher’s permission, I’ll quote one section for you here, the section about fallacy 21, “Composition”.

When I was a young boy on an incredibly long and wearisome trans-Atlantic voyage, I spent many hours trying to figure out why my left hand was my right hand in the cabin mirror, and my right hand was my left, while at the same time, my head was right where my head was supposed to be—at the top—and so were my feet. If the mirror “flipped me,” then why didn’t if flip both ways?  A reasonable question for a ten-year-old boy, but it was not until years later than an answer occurred to me in the middle of the night as I lay sleepless and shivering in a Mongolian yurt. Up and down are not the same kind of thing as left and right are.

In the same way, not all adjectives are the same. So, for example, if all the pieces of a bridge are wooden, then it is possible to say that the whole bridge is wooden. All the wooden pieces add up to a wooden bridge. But if each of the wooden pieces is less than a ton, I cannot add them all up and get a wooden bridge that is less than a ton. “Wooden and “light” are different kinds of adjectives. Wooden adds up to wooden, but light adds up to heavy.

When people fall for the fallacy of composition, for that is what this business is called, they usually do it because of the work of the Mad Addler. When captured and safely contained behind glass, a single Mad Addler looks like a large-eyed, barb-quilled hedgehog. But in the wild, they travel in small packs and hide their vile scent with a wide variety of aromatic flowers and spices pierced on their quills. While each flower is harmless and even attractive, a hunting pack of Mad Addlers will stack themselves up in combinations that give off such heady and mind-altering aromas that their victims can be easily controlled (or devoured) by what appears to be nothing more than a teetering eight-eyed stack of flowers. Under the Mad Addler’s influence, a physician may decide that a human infant is nothing more than cells because that is what the poor baby is made of, a despairing philosopher may claim that man is merely water, and an astronomer may assert that a star is nothing more than burning gas (when we all know that it is more truly angelic). But the reverse falsehood can be embraced as well—a thing can be condemned as dangerous because it has dangerous components, when the whole is something quite helpful.

Most importantly, no matter how much you may enjoy flowers, if you come upon a powerfully smelling stack of blooms constructed around the occasional pair of blinking eyes, flee immediately before madness ensues. Or resort to a shotgun (pp. 113-115).

Exercises then present seven different situations for which students must identify whether or not a fallacy is present. If a fallacy is present, they need to identify which type of fallacy it is. While some exercises stick with only the type of fallacy in that lesson, some include fallacies from recent lessons as well. I expect you will find the answer key at the back absolutely essential, since many of these are tricky. Depending upon the learning environment, you might want to also use the exercises for discussion rather than written work.

Those who want to treat things more academically might want to use the free quizzes, tests, and answer key available at the publisher’s website. In the same section, you will also find two other free downloads that might be of interest, Cultural Cheat Sheet for Christians (no. 1): Abortion Fallacies and Cultural Cheat Sheet for Christians (no. 2): Gay Rights Fallacies.

Subtle and not-so-subtle references throughout the book let on that the book was written with a Christian, homeschooling audience in mind. While I review the book as one that should be used by teens, I suspect that many adults will enjoy the book as much or more than teens. Those who might have been introduced to logical fallacies through some other course are unlikely to have encountered all of those covered here, and they certainly will not have learned about the bestiary that accompanies them. Even if Dr. Ransom is reviewing some previously-learned concepts, his unique storytelling talents should prove greatly entertaining.