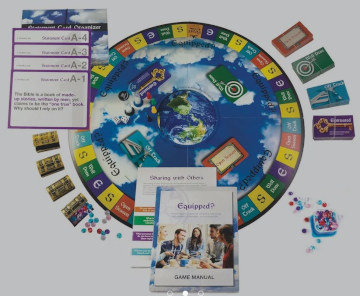 Equipped? is a game that tests your apologetics skills, Bible knowledge, and communications skills. It was designed for ages 14 and up and for two to six players. Up to four people can play as individuals, and players can pair up as teams—they will need to pair up if there are more than four.

I first played Equipped? with my eleven-year-old granddaughter who is considerably younger than the stated age range. She had a little trouble evaluating my responses, and we had to skip over an age-inappropriate card that was drawn, but otherwise, she did great and very much enjoyed playing. Players need to be somewhat familiar with the Bible and need to have thought about what it takes to share the gospel with others. My granddaughter has participated in the Awana program for a number of years, and her family talks about evangelism opportunities, both of which enabled her to play. I’m sure many Christian homeschoolers have had similar experiences and could play before they are 14. There are a number of chance elements in the game that help to even the field for players that differ in their knowledge of scripture and familiarity with apologetics. I also played another time with two other adults to evaluate how different the experience might be.

The game comes in an oversized box and weighs in at about 6.5 pounds. There are a number of heavier components that contribute to the weight. These are a large circular game board (folded into one-fourth its size), an accordion file with 8” x 6” Statement Cards (contributing two of the five pounds), and four decks of cards. Other game components are a plastic box of gems, four plastic treasure chests in which players collect gems, four dice, four pawns, and two hourglass timers (a 30-second and a 60-second timer).

Players roll a die and move around the ring on the outer edge of the game board. The spaces are marked for players to choose a card from one of the four card decks or to respond to a Statement Card. The four card decks are placed in the center of the board. Players will decide which group of Statement Cards to use for their game.

Some of the categories have two parts. Each part, and each category with only one part, has seven cards. You will choose one part (group of seven cards) as the basis of each game you play. You can play through the game more than once as players improve their skills, but this isn’t a “forever” game since you will eventually become overly familiar with the Statement Cards.

The four card decks and their purpose in the game are as follows:

Entrusted cards have a Scripture passage (New American Standard version) with the word BLANK in place of a missing word. The player has to come up with the correct word. (The answer is at the bottom of the card.)

Well Done cards have statements that ascribe some positive action to the player who landed on the space. For instance, one card reads, “You know you cannot separate the message of God from the person you are. You really are trying to live the overcoming life and be a true follower of Christ…a good witness.” Players read these cards aloud, but they don’t need to do anything other than collect one to three gems.

Off Track cards are the opposite of the Well Done cards. A negative action or attitude is ascribed to the player and they lose one or two gems. One example is a card that reads, “You get discouraged because you don’t know a lot about the Bible. God says He uses the weak to confound the strong. Share what you do know. God can still bless.”

Open Season cards, while random and unrelated to the game’s theme, help relieve the intensity that can arise in the game, especially with the Statement Cards. These are meant to be fun activities. Players generally have to share something, sing a song, or recruit another player to do something with them. For instance, one card reads, “Landee [player who landed on the space] and any chosen opponent tell if they would eat a grasshopper for $10, then how about $100, $1000?” One card has a player hum a tune while others guess what it is. These cards are a mixture of silliness, personal revelation, performance, sharing memories, and other off-topic things. We pulled one card from the deck that asks the player to share about their first kiss, and there are two cards about the workplace and careers that might only be suitable for adult players. Players generally can easily earn one or two gems when they draw one of these cards.

The Statement Cards are the main point of the game. When a player lands on “S” another player draws one of the seven statement cards. Before playing, you need to review the guidelines for answering these and maybe practice the types of responses players are to give so that everyone is clear about the guidelines.

Players are supposed to be practicing skills for sharing the gospel, so an opposing player reads the statement from the card—something that a non-Christian might say, such as, “Life ends with death. There is nothing else.” The player is supposed to respond with three types of answers, earning one gem for each one that is accepted by the other players. First, they are to reword the statement to seek clarification, saying something like, “So you’re saying…” Then they can earn a second gem by responding with a question of their own. It might seek more clarification or dig deeper into the person’s beliefs. They can earn a third gem by responding with an apologetic type of response. A number of likely apologetic responses are on the reverse side of the card—that’s why the cards are so large. Other players judge the responses, using the card as a guide, but accepting answers that are sensible. The goal is to help players improve their skills. Players should encourage one another rather than be legalistic about the responses. You might even take time for a general discussion about possible responses after a player has had their opportunity to answer. If disagreements arise since correct answers are not always cut and dry, it might help to have a judge who is not playing the game. (Learning how to deal with disagreements among themselves can also be a learning opportunity for players since those trying to present or defend their beliefs will often run into disagreements.)

The Game Manual suggests a variation for playing a second time through the same Statement Cards where players take apologetics to the next level by coming up with additional arguments, pertinent scripture passages, and possible responses to objections. You can create your own way of playing, maybe even having someone play the Devil’s advocate by giving a series of objections while a player (or team) tries to come up with either responses or counter questions. There are also suggestions online for Follow Up Sessions.

There are a few Statement Cards that parents will want to be aware of before playing with younger players: two cards on homosexuality and sex before marriage, and another that addresses non-Christian lifestyle choices, the LGBT+ movement, and the pro-abortion position.

The Game is Best For…

Equipped? can be played by a family, but it is also ideal for a small group class (high school level or above) that is studying worldviews or religion. (The publisher's website suggests some specific settings, such as Bible study groups, college and career groups, camping programs, and outreach teams.) It is difficult to provide authentic practice opportunities for defending one’s beliefs, so Equipped? gives you a starting place. It alerts players to many of the questions or statements non-Christians (and some Christians!) are likely to present. It stresses the extremely important communication skills of listening well, rephrasing, and asking questions rather than simply presenting arguments. And then it helps players learn how to formulate appropriate responses.