I Don't Have Enough Faith To Be An Atheist 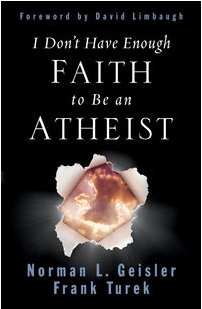 The book, I Don't Have Enough Faith to Be an Atheist, by Norman L. Geisler and Frank Turek (Crossway Books), was published in 2004. The book on its own is fantastic, but Apologia Press has published a curriculum to accompany the book that turns it into a full-year Apologetics course appropriate for the last two years of high school as well as for adults.

I was first introduced to the book by a recent convert to Christianity, a lawyer by profession, who raved about the book because its arguments were so convincing to his logical, analytical mind. He was new enough in the faith that he easily recalled the attitudes and beliefs held by many unbelievers—the stumbling blocks to faith for those who need religion to make sense.

The introduction to the book sets the stage by listing the five most consequential questions in life and explaining why they are important. It considers whether or not it is important to believe that God exists, and if God exists, what kind of god he might be. It introduces the idea of contrasting worldviews, simplifying it to the choice of theism, pantheism, and atheism. Most importantly, the introduction presents a twelve-point logical progression of thought that outlines the arguments that will be presented in the book.

I won't list all twelve points here, but they begin with the question as to whether or not truth about reality is knowable. From there, the authors go on to examine evidence for the existence of God. Then they consider such things as whether or not there is a moral law so that we can know what is good or evil and whether or not miracles are possible. After making a case for theism and God's revelation of Himself to man, it then narrows the investigation down to the claims of Christianity, considering the reliability of the New Testament, Jesus' claim to be God, and whether or not the Bible is the Word of God. Each point is carefully and thoroughly discussed, often weighing alternative arguments.

The book is well written and footnoted for those who want to do further research and reading. While it is logical and loaded with evidence, the style of writing makes it very readable. This is not an intimidating book even though it will take a good bit of time to read.

The I Don't Have Enough Faith to Be an Atheist Curriculum was written by Frank Turek, one of the authors of the original book, and Chuck Winter. The Curriculum parallels the book exactly, including companion lessons for the book's introduction as well as for the three appendices.

The Curriculum uses a “hook, look, book, took” approach to learning. Students will first read the chapter in the book. Curriculum lessons each begin with a summary of key points. The “hook” section then presents “Questions that Grab Your Mind” and “So What?”—a section that helps students understand the importance of the answers to those questions.

The “book” section presents summary statements and comments then poses questions. Answers to these questions can generally be drawn from the assigned reading in the book. Students' thinking skills are often challenged with questions such as “Give an example of a deductive argument that is logically sound but not true” (p. 49). Note that inductive and deductive reasoning are explained in both the book and the Curriculum, and examples of arguments have also been presented. The “book” section also features articles on people or topics that are illustrative of each topic.

The “look” section consists of assignments that encourage students to think, research, and write in greater depth. For example, one assignment says, “Research an influential figure in today's society to find out what he or she believes. What are his moral values? How do her ideas impact the way she lives? What does he believe constitutes truth? Write a one-page essay documenting your findings, concluding with a paragraph on what you think his or her beliefs and practices will do—today, tomorrow, and ultimately, after death” (p. 49).

The “took” section poses a series of questions for students to answer under the heading “Thinking about what you learned.” These questions generally ask students to sum up or explain key arguments from the chapter.

The Curriculum book is a worktext that includes all instructions, questions, and space to write most responses. Students will need to write lengthier essays outside the worktext. No teaching is required. While the course is fine for independent study, it is even better for a group class where students can discuss and share ideas with a parent or teacher serving as a facilitator.

The publisher provides a free downloadable 111-page answer key, chapter tests, and answer keys for the tests. The password for access is at the front of the Apologia worktext.

With good reason, I Don't Have Enough Faith to Be an Atheist has been a best-selling book. The companion Curriculum makes it even more useful. I highly recommend the course for homeschoolers as well as for Sunday school classes or independent study by adults.

�I Don't Have Enough Faith To Be An Atheist" Text

�I Don't Have Enough Faith To Be An Atheist" Curriculum