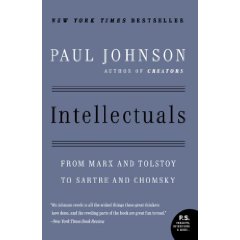 What people say or teach and what they actually do are often at odds with each other. This is a common failing of man, which rarely attracts much attention.

However, many philosophers who have claimed to have answers to life problems or issues need to be held to a higher level of accountability in this area. Consequently, author Paul Johnson examined the lives of a number of major philosophers and authors, comparing what they taught with how they lived.

The common thread is the all too common discrepancy between beliefs and actions. For example, Rousseau, who claimed to love all of mankind, relegated his own children to an orphanage (to die) rather than be bothered with the responsibility of parenting.

The various sections of this book are written such that they can be read independently of each other. This feature makes it easy to tie in studies of the featured individuals with periods of history or with literary studies. The reading level is high, so either digest information yourself and pass it on to your children, or assign reading to mature students in reasonably-sized doses.

Johnson states in his conclusion: "One of the principal lessons of our tragic century, which has seen so many millions of innocent lives sacrificed in schemes to improve the lot of humanity, is-beware intellectuals. Not merely should they be kept away from the levers of power, they should also be objects of particular suspicion when they seek to offer collective advice."

As a resource for proving the link between false worldviews and their negative consequences, this book is invaluable. I would put this on the "must read" list for all adults.

Intellectuals: From Marx and Tolstoy to Sartre and Chomsky