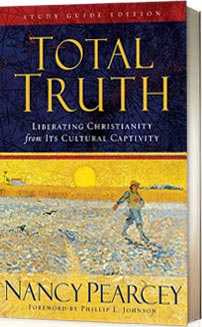 Nancy Pearcy helped create Charles Colson's excellent book, How Now Shall We Live? (published in 1999), and now she has produced what might be considered a deeper presentation on similar worldview themes in Total Truth.

Total Truth can still be the starting point for those beginning their investigation of worldviews, but it definitely targets an adult audience at the college level and above.

She begins with an introduction of worldviews and their applications. Pearcy does a magnificent job of drawing from the broad spectrum of knowledge and experience--from ancient to modern philosophers, from the world of science, current events, pop culture, politics, and the feminist movement. She makes connections so we can better understand the impact of philosophical ideas upon both beliefs and actions.

A signifcant section of the book is devoted to a refutation of Darwinian evolution, presented from an Intelligent Design perspective. Pearcy goes beyond the scientific arguments to discuss the impact of Darwinian thought on culture and values as well as its "takeover" of the arts and humanities, the educational realm, and the judicial system. Pearcy expands on many of the ideas taught in less-challenging worldview books and courses as well as ideas presented by Phillip E. Johnson (author of Darwin on Trial and a number of other books) who is credited as "father of the ID movement." Johnson writes in his forward to Pearcy's book, "When Nancy Pearcy invited me to write a forward for her 'worldview' book, I hastened to accept the honor. I was honored by the invitation because this is a book of unusual importance by an author of unusual ability."

Rather than blaming non-Christians exclusively for problems resulting from false worldviews, Pearcy also addresses the historical development of Christianity, particularly in the United States, showing how many Christians withdrew from any sort of intellectual confrontation with the secular world. By the twentieth century, they along with the rest of the cultlure was well on its way to accepting a deep division between between faith and reason that caused many to abandon any sort of Christian worldview that connected faith to the rest of life.

Pearcy reserves an entire chapter to address harm the feminist movement has caused to our culture and families. Titled "How Women Started the Culture War," this chapter addresses a host of problems arising from feminism that are working to destroy marriages and families as well as our churches. This chapter is particularly enlightening, addressing topics seldom discussed in other worldview books.

At 500+ pages, this is not light reading, but it certainly will be rewarding for those willing to invest the effort.