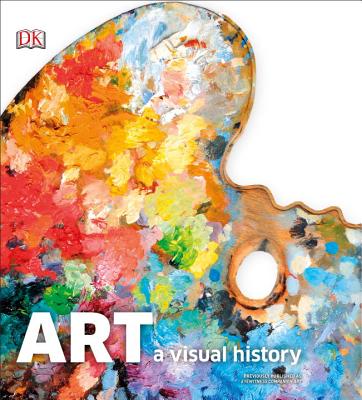 An introduction for each section includes an overview and a timeline of “current events” for each era so that readers have a better context for understanding artworks of that period.

Cumming has chosen breadth of coverage over depth, including more than 650 different artists with short biographies, brief descriptions of their work, and a list of a few key works for each artist. Space allows for images of a key work for only about half of the artists. For example, both Fra Filippo Lippi and Fra Angelico, two of my favorite artists from the early Renaissance, are both on the same page, but there is space for only one image by Fra Angelico. Still, I can read about Lippi and easily Google images of his works to view. Occasionally, two or three images are included for major artists like Titian and Vermeer.

A “close-up focus” on 22 works highlights and explains a number of elements within each of these selected paintings. In these instances, we get a larger image of the artwork and much explanation.

Cumming explains that in his first job at the Tate Gallery when he escorted people through the gallery, there were three primary questions that audiences wanted answered: 1.) What should I look for, 2.) What is going on? and 3.) How was it made? He keeps those questions in mind in this book, but since he doesn’t provide a specific image for every painter, his explanations for artists tend to focus on the first question. He often generalizes about the commonalities and techniques used by the artist in his or her works. More space and text is dedicated to some major artists, but generally the information is more abbreviated. For example, for Pieter Bruegel , Cummings explains,

Nicknamed "Peasant" Bruegel because of the subject matter of his paintings, he was the leading Flemish artist of his day whose subjects reflected contemporary religious and social issues. He paved the way for the Dutch masters of the 17th century. His works are brilliant and accurately observed commentaries on the appearance and behavior of the ordinary people of his day—like a first-rate stage play or TV soap opera. They are powerful because, as well as enjoying the existence and minutiae of his day and age, we can recognize ourselves—especially when he illustrates human follies, greed, and misdemeanors…. Bruegel’s bird’s-eye views place us outside his world (we look down godlike, distanced, and superior); then by the fineness and charm of detail he draws us into it…. Clear outlines and detail lead the eye through each picture (p. 109).

As you would expect, the book itself is beautifully illustrated with the various artworks. Religious themes dominated artwork for a number of centuries, and that is reflected in this book. However, Cumming takes a secular approach to art, including all types of art. For example, immediately after the aforementioned page on Fra Filippo Lippi and Fra Angelico, is a page on Donatello featuring his statue of David. The text says, “David was a move away from traditional religious imagery and the homoeroticism is instantly apparent” (p.48). David is only one of many nude images in the sculptures and paintings in this book. The primary images used to illustrate the works of both Edouard Manet and Pierre-Auguste Renoir are both nudes. These are artists I want my children to know, but I would personally want to choose other illustrations from among their many paintings for this purpose.

Art: A Visual History should be a very helpful resource for homeschooling families. However, I would use it as a parent resource for preparing and leading discussions, using images selectively, and supplementing with others from the Internet as needed.