Stone Giant: Michelangelo's David and How He Came to Be 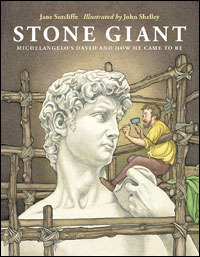 Stone Giant tells the story of Michelangelo’s creation of his famous statue of David in this beautifully-illustrated book. The story takes place in the Italian republic of Florence. The author presents the story as an analogy between the biblical story of David and Goliath and city of Florence against other Italian republics. Just as David was small in comparison to Goliath, so was Florence smaller and less powerful than her neighbors. The statue was intended to portray the strength and valor of Florence—a source of civic pride and inspiration. A number of sculptors had attempted to work with the huge block of marble the city owned, yet all failed until Michelangelo took on the task.

This 32-page book can be read aloud in a single sitting. The text is easily understandable for young children with the publisher recommending it for ages six to nine. The gorgeous, full-color illustrations also relate the story in pictures while also providing windows into both Renaissance culture and the art of sculpting. These features make it a great resource to use as part of your study of that era of history.

Be aware that there is an illustration of the statue of David showing full frontal nudity. Parents will probably want to read the “Author’s Note” at the end that explains how the statue fared over the centuries including some of the “additions” that were made to the statue at later dates to make it less controversial.

Stone Giant: Michelangelo's David and How He Came