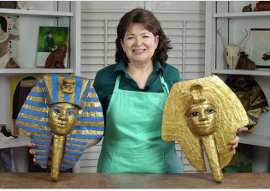 Take Time for Art is a series of four art and history courses that combine both online and hands-on learning. The courses are Ancient Egypt, Ancient Greece, Ancient Rome, and The Middle Ages.

Each course consists of 15 to 25 video presentations by the course creator, Penny Mayes. The videos include some that teach about the historical period and the culture, including its art and architecture. I’ll refer to these as the history videos. The other videos show the step-by-step processes for creating each project. Take Time for Art says that their average beginning age for students is ten. While some projects can be done by younger students, others will be most suitable for students who are 12 and older. Adult assistance will definitely be needed with some projects.

The history videos vary in length, running about five to eighteen minutes each. They are heavily illustrated, including photos, historical images, artwork, maps. (Mayes carefully shows portions of images to avoid full nudity.) As part of the presentation, Mayes tells stories of key figures from history and mythology. She also explains how the art and architecture have made their influence felt around the world, from ancient to modern times. The wealth of images makes the videos very interesting to watch and the content more memorable. I also like the way she often wraps up the history videos by leading directly into the next art project.

Depending on the depth of coverage parents or teacher desire, Take Time for Art courses can be used as either the core of your history curriculum for these four topics (like mini unit studies) or as supplements to resources that provide more comprehensive coverage. Whether or not the amount of historical coverage in Take Time for Art is sufficient for any of these time periods depends upon the goals of each parent or teacher. I think the coverage of ancient Egypt and ancient Greece might be sufficient within these courses for some situations. The Ancient Rome course probably needs additional material, and The Middle Ages course definitely does. The history is often presented in a whirlwind fashion, so students might need to watch the videos more than once. The art projects on their own can be used alongside a traditional textbook, a story-based approach to history, or a unit study.

The courses are presented from a Christian perspective. For example, in the video on “The Dark Ages and the Archaic Period” in the Ancient Greece course, Mayes presents a Christian viewpoint on the value, dignity, and purpose of the individual as a contrast to the beliefs of the ancient Spartan culture. In that same video, she tells the biblical story of Queen Esther in relation to the Persian King Xerxes. In both cases, she uses Christian artwork to illustrate as she talks. The content is broadly Christian, although a more specifically Protestant point of view starts to appear in The Middle Ages course, especially in the presentation about John Wycliffe. 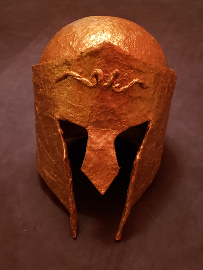 The art projects do an excellent job of reinforcing what students learn in the videos. For example, in the Ancient Greece course, students learn about Greek soldiers then work on creating a Greek helmet that has an authentic look. Projects are often presented with both easy and more challenging ways to do them so that parents can help direct students in a fashion that will help them be successful.

Each course has an art pack with supplies for the projects—supplies such as paints, clay, templates, and special types of paper. Each student needs his or her own art pack. Art packs include any unusual items you will need. In the Ancient Greece art pack there were packages of plaster gauze, tooling foil, and a white paint pen—I wouldn’t know where to find any of these. A list of materials included and materials you’ll need to get on your own is provided as a printable file in each course’s resource section.

I’ll describe the four courses, but I will focus more closely on the Ancient Greece course since that was the course I fully reviewed.

The Ancient Greece course consists of 15 videos. The six history videos are titled “Introduction,” “The Ancient Minoans,” “The Mycenean Civilization,” “The Dark Ages and the Archaic Period,” “The Golden Age of Athens,” and “The Hellenistic Period.”  Nine videos show the step-by-step processes for each project. I especially appreciated that the project demonstrations were clearly presented and thorough enough that we could watch the video then go to the project without having to rewatch the video.

The projects in this course are a color wheel, an ancient Minoan fresco, ancient Mycenaean metal tooling, a Greek vase design painted on a flat tile rather than a rounded vase, and an ancient Greek warrior’s helmet. The color wheel is the only project I’d consider easy, although the metal tooling (particularly the landscape option) and the Minoan fresco (created with a Sharpie® and watercolors) can both be simplified enough for younger students. The tile painting requires accurate drawing skills since students use black and white markers to “paint” the terra cotta tile. The Greek helmet is probably the most complex since it has a number of steps and will probably take at least three sessions to complete. The helmet is created with plaster gauze that is wetted and then formed over a cardboard base. You'll need to stop to let things dry at different stages of applying the plaster gauze. My granddaughter who worked on this project loved it so much that she wanted to make a tiara for her younger sister using the same techniques.

The Ancient Egypt course presents the history in two of the videos. Another two videos, titled “Tomb Art” and “Tomb Retirement Plans and Tomb Painting,” explain how important the burial process was and the forms of art that accompanied it. Twelve videos are used to demonstrate how to complete the projects for the course: a color wheel, an Egyptian mummy mask, a tomb painting, and two sculptures. Seven of the project videos present simple or advanced ways to construct and decorate the mummy mask, the most complex project in the kit.

In the Ancient Rome course, seven history videos are intermixed with project videos, with one or more videos per project. Each history video covers a number of topics. For instance, the third history video covers the Roman army, Roman roads, Spartacus, Cincinnatus, Julius Caesar, Caesar Augustus, and ancient Roman portraits. In the history videos, Christianity is given quite a bit of attention with segments on Judea, the birth of Christ, Jesus’ life and death, and the growth of Christianity in the Roman Empire. Projects include a Roman arch (constructed with clay blocks), a Roman bust (clay sculpture), a front-on portrait and a ¾ profile portrait in a Roman style (both created with a fine-line marker and watercolors), a dragon puppet project, and a tile mosaic.

The Middle Ages course begins with the fall of Rome, covering a broad range of historical topics such as the Anglo-Saxon invasion of Britain, Attila the Hun and Constantinople, the rise of Islam, Charlemagne, Vikings, castles, feudalism, William the Conqueror, the Crusades, famous medieval artists, the Black Death, and John Wycliffe. Projects include a color wheel, Anglo-Saxon jewelry, a Byzantine mosaic, a marshmallow catapult, an illuminated manuscript letter (e.g., the letter A), a medieval shield, and a Gothic rose (stained glass) window that is made with diffusing paper, permanent markers, and watercolor markers.

Based on the title of the series, I expected that the Take Time for Art courses would primarily serve for teaching art. The courses definitely do a great job of teaching a variety of art skills, art history, and art appreciation. However, I was surprised and impressed with the depth of the historical coverage. Because the video lectures are enhanced so effectively with strong visual images, the courses teach history very effectively.

Subscriptions to online courses: either $40 for access to one course for 20 weeks OR unlimited access to all courses for $10 a month
Art packs are $55 each