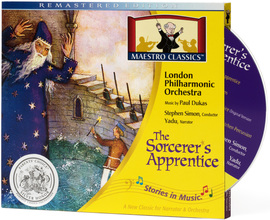 Maestro Classics® offers some of the best resources for music appreciation I’ve come across that are brief supplements rather than a complete curriculum. They have produced 12 audio CDs with companion booklets. More than half of the CDs feature classical works of music while the others set stories or poems to music. The goal of all of the Maestro Classics is to help children “hear the story” in the music, even without narration. Stephen Simon and Bonnie Ward Simon created this series with the help of voice artist Yadu.

Some CDs include complete musical pieces while some are abridged. The total playing time of each CD is less than an hour.

The publisher suggests Carnival of the Animals for children as young as three. Mike Mulligan and His Steam Shovel, The Tortoise and the Hare, and Peter and the Wolf are recommended for ages four and up. Age recommendations go up from there with The Soldier’s Tale suggested for the “most mature” audience of those ages eight and up.

All of these recordings are also available as downloadable MP3s with downloadable files for the booklets. I’ll refer only to the CDs in this review to keep it simple.

One track on each CD introduces the musical work, story or poem. Other tracks vary to reflect the nature of each work. For the musical works that have no words, Yadu presents a narration against the music as a backdrop so that children can learn what various parts of the music are meant to convey. Stephen Simon points out techniques used by the composer and musicians to create different effects. Children will later hear the piece without narration. At the end, there is always an activity to involve children in music making themselves.

CDs such as Casey at the Bat and Mike Mulligan set the reading against a musical backdrop. The music dramatically emphasizes the stories.

The Sorcerer’s Apprentice provides a good example of the type of tracks contained on each CD. On the first track, Yadu explains the storyline which is based upon Johann Wolfgang Von Goethe’s poetic version of the story. We hear parts of the musical score as we listen to the story.

In the next track, Bonnie Ward Simon tells more about the story, the music, and the composer. She explains that the original version was written by the Greek author Lucian in the second century and that Goethe changed the moral of the story from that of the original. In the late nineteenth century, the composer Paul Dukas set Goethe’s version to music with no narration; the music itself conveys the story. The score became very well known when Walt Disney used it in Fantasia.

On the next track, we listen to ”The March of the Brooms” played by the Boston Crusaders Drum and Bugle Corps. On track four, Stephen Simon, conductor and co-creator of Maestro Classics presentations, explains the music itself, highlighting various instruments and musical arrangement techniques. Track five features the original instrumental version of the entire piece.

On the sixth track, Bonnie Ward Simon invites children to join in to create percussion to accompany the music using pots and pans or whatever they want. She gives some examples of rhythms for them to try. The final track is “The March of Brooms” for which children are to provide the accompaniment.

The Maestro Classics presentations vary according to their source material. Bagpipes introduce the story of Mike Mulligan and His Steam Shovel. Then it is read against orchestrated background music written by Stephen Simon. Another track features a jazzy, original song about Mike Mulligan himself.

Juanita the Spanish Lobster is wonderfully creative and unusual. We first hear the true story of Johnny Marris, the pig farmer and local storyteller who became a well-known television host. One of his stories, “Juanita the Spanish Lobster,” is retold against music created by David Haslam. Stephen Simon explains that Haslam wrote the music combining Spanish style music (since Juanita was Spanish) with belcanto opera music since Juanita lived off the coast of Wales, and the Welsh love opera. If that’s not silly enough, there’s also a track with the song “O, Juanita” sung Elvis Presley style.

On Casey at the Bat, a dramatized reading is set against a score played by the London Philharmonic Orchestra. Audio theater elements and other voice actors bring the story to life.

Each CD or MP3 comes with a small, 24-page booklet. Keep in mind that as with the audio presentations, booklets vary in content. The booklet for The Sorcerer’s Apprentice includes images of the authors and composer with sentence-long notes on each accompanied by a brief activity. The next two pages show the instruments of the orchestra and how they are arranged. A code puzzle on the next page is followed by a one-page biography of Dukas. Next is a crossword puzzle, then a very simple arrangement of the music for “The March of the Brooms” for those who might want to play it themselves. The next three pages show and explain mallet instruments such as the glockenspiel and the marimba. Children can complete a dot-to-dot on the next page. A pitch promoting drum and bugle corps is then followed by biographies of the authors and narrator for this presentation. These booklets are not essential, but you might find some of the information and activities useful.

The Maestro Classics presentations are delightful. Even as an adult, I found them totally engaging.

Comparison prices show only selected titles rather than all of them.

Casey at the Bat CD

Peter and the Wolf CD