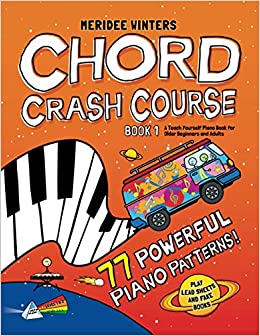 Meridee Winters began as an elementary school teacher who played music on the side. But music eventually became her dominant career. She eventually went to work in a music studio, but she was surprised at the number of vocalists who couldn’t play either the piano or guitar. They needed help from others to write their music. So Winters decided that creating a “chord crash course” would be the best way to help them become better songwriters and musicians. Based on these teaching experiences, she eventually started a school to teach music, creativity, and songwriting. To make that course easily accessible to people beyond her classes, Winters wrote the book, Meridee Winters™ Chord Crash Course, Book 1.

Meridee Winters Chord Crash Course, Book 1 addresses piano playing. It teaches chords, chord progressions, arpeggios, transposition, and other skills. Winters’ approach helps pianists quickly learn how to put together some great sounding music by simply working with chords and arpeggios. While she introduces other intervals (seconds, thirds, and fourths), in this course she uses fifths most frequently. This keeps it simple enough for students to make quick progress. (Book 2 is in the works, and it will continue to build on this foundation.)

The idea is that if students can learn to play chord progressions, and they understand rhythmic patterns, they can compose music for all types of instruments, even if they don’t know how to play all of those instruments.

The course does not teach students how to read music in the traditional sense—no practice identifying time signatures, types of notes, or names of notes on the treble and bass clefs. While the Chord Crash Course book says that students do not need to learn to read music, it seems to me that they still have to do so to some extent if they are learning to play the piano. Winters shows fingering on hands in the early lessons, but throughout the book she often shows keyboards with notes identified on pictures of piano keys. In addition, standard written music is often presented, sometimes with letter names of notes superimposed on each note. When music is presented on staffs, throughout most of the book chord notations are included above the staffs. All of this means that various ways of learning to read and play music are presented throughout the book. Still, this is not intended to be a thorough course for reading music.

It seems to me that someone who knows nothing about reading music might find the information overwhelming and confusing. While students need not be proficient at reading music, I think they will benefit most from this book if they bring some previous knowledge to the table.

I’ve had years of both piano and violin lessons, but I play neither instrument well. I sat down with this book and experienced a delight in the approach that is generally missing from traditional music lessons.  My seven-year-old grandson, who has taken some piano lessons, came over recently, and we quickly constructed a simple duet based on one of the exercises in the Chord Crash Course. It sounded great. I, personally, found the approach refreshing and encouraging.

The course covers a lot of material, so it is important to take time to really work through each lesson, including actually transposing music into different keys and then playing it.

I can envision at least two audiences for Meridee Winters Chord Crash Course. First, I can see it being used as a supplement to other music instruction. Students can learn to read music, practice their scales, and do the other exercises that teach basic skills in a traditional fashion while simultaneously using this book to quickly reach a point where they can actually create some interesting music. The second audience might be those who really don’t want to learn to read music but want to be able to pick out tunes on the piano using chords. (I have one son who would have loved this approach.) Of course there are probably other potential audiences for this book, but the point is that many people who might not enjoy traditional music lessons might find this course inspiring.