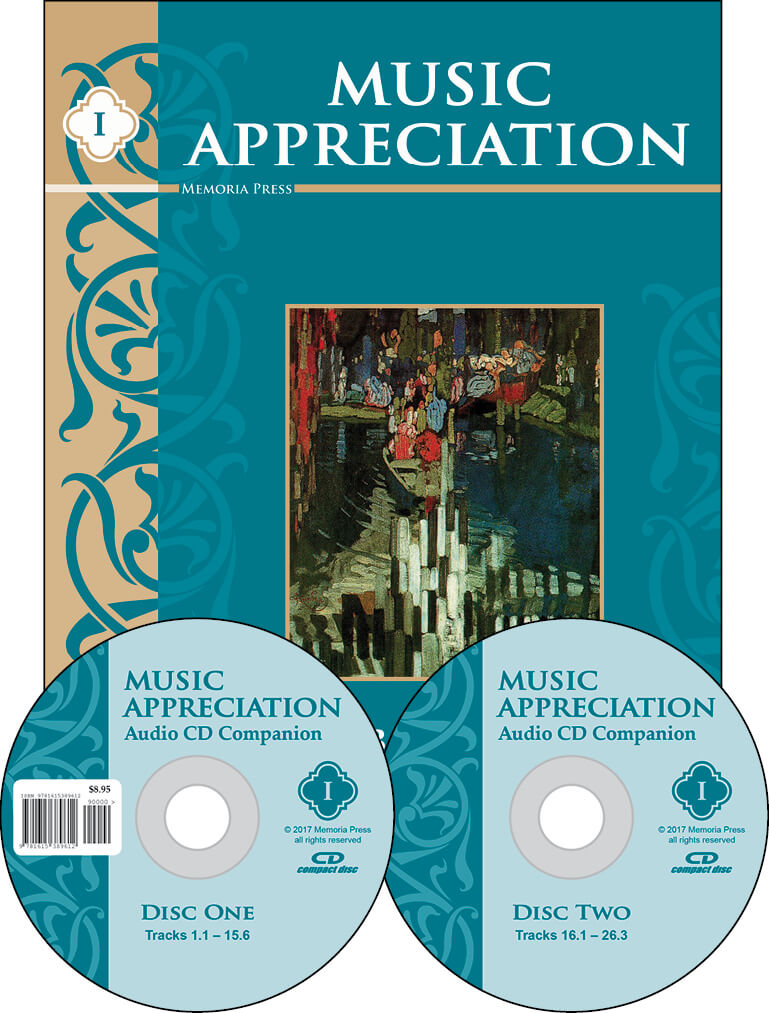 Memoria Press’s Music Appreciation: Book One presents 26 lessons that feature musical pieces in approximately chronological order from the seventeenth through the twentieth centuries. The course consists of a textbook and two companion audio CDs with very brief tracks that highlight key points in each lesson. A complete playlist of the musical pieces is available online on both YouTube and iTunes at no cost. Tests and answer keys are included at the back of the book. I recommend removing these before giving the book to students.

You should be able to complete each lesson in one or two sessions per week. The lessons all follow the same structure. The author selects one musical piece for each lesson, generally one section from a larger work. For instance, he selects only the first of four movements from Eine kleine Nachtmusik by Mozart for the fifth lesson.

Each lesson begins with “A Little History,” which is generally biographical information about the composer. Sometimes this section of the lesson also includes information about how or why the featured piece of music came to be written.

The second section of the lesson, “Musical Concept,” teaches about topics such as programmatic music, melody, rhythm, harmony, chamber music, symphonies and their movements, leitmotifs, tempo, grace notes, and  the “blues scale.” This is not a comprehensive music theory course, but from time to time it does introduce basic music theory, and the textbook includes musical scores and musical notations illustrating some of the topics that I listed. The brief musical scores are performed on the CDs, and students can simply listen to them. Additionally, the scores can be played on an instrument by those with the ability to do so. (Some of these brief pieces will be played again as part of the tests.)

The musical scores (and their tracks on the CDs) are most often included as part of the third section of each lesson, “About the Piece.” In this third section, there might be explanatory information about the origin or meaning of the featured piece of music. Here, the course author’s experience in arranging music for ensembles comes to the fore as he frequently talks about the roles of different instruments in the performance of the piece.  For instance, on page 44 he explains,

Right from the start of the piece, Beethoven tells us in music how he feels upon his arrival in the country with the low strings playing sustained, peaceful notes, while the violins play the first melody. It is lively, but also serene and happy …

Many of the lessons, but not all, include a section titled “Music History” that explains the historical development of various types of music. The last two sections of each lesson are “Facts to Remember,” which summarizes key points, and “Listen Again,” with suggestions for listening to the entire musical performance.

The publisher recommends this course for students in third grade and above. However, some background knowledge of world geography and world history gives students some context for understanding the composers themselves as well as musical developments. I would wait to teach this course until after a student has been introduced to world geography.

Students who have already had an introduction to music theory should find the course easier than students who have not. For example, the ninth lesson teaches the layout of notes on the piano keyboard, but in addition to the white keys, it teaches about half steps and sharps. That’s a lot to absorb in one lesson if it’s entirely new material.

Compared to other music appreciation courses I have reviewed, this course devotes more attention to the structure of music, the roles of various musical instruments, and musical performance. It does this while still covering biographical information and introducing famous musical works such as Vivaldi’s Four Seasons, Tchaikovsky’s Nutcracker Suite, and Gershwin’s Rhapsody in Blue.

While the course might have special appeal to those parents and teachers who have a musical background, those without that background should still find it easy and enjoyable to teach.