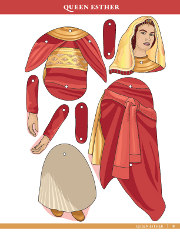 Figures in Motion first came out with their history series which I have already reviewed. (Click here.) They are now producing a Bible series. The first book in the series is Queen Esther.

Like the history series, this series has cut-out, movable action figures for learning each story. Figures are two-dimensional cardstock figures with movable parts connected with either small metal (1/8”) brads or eyelets. Two versions of each figure are included: one in full color and the other in black-and-white for children who like to prefer to color figures themselves. Figures appear in authentic period costumes and are about 11 to 12 inches tall when finished.

Each Footstep of Faith book includes a synopsis of the story and information about each character. With the purchase of each book, you also get a downloadable script that children can use to act out the story.

Note that Figures in Motion sells a Punch and Fastener Pack that has the unusual size, long-reach punch and brads. I would recommend this Pack since these are probably not easy to find in your local store.

List Price: $12.95 each. PDF licenses are avaialble for larger groups