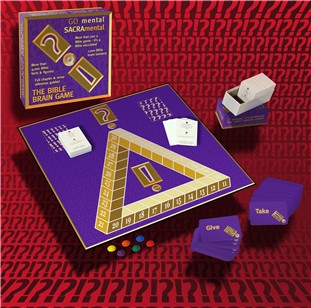 GO mental SACRAmental® might have languished for months awaiting review since I thought it was just another Bible trivia game and I give priority to core curricula. However, one of my sons pulled it out, started looking at it, and then started asking some of the questions... and I was hooked.

The questions are not the usual multiple choice, guess-the-right-answer type questions. Instead, there are four statements on a card such as one that reads:

The game includes “Give” and “Take” cards which can be used to give your question to another player when it’s too difficult or take a question before another player has a chance to answer. You would likely use a Take card only when you are certain you know the answers. Higher points for moving either forward or backward are earned and lost with Give and Take questions, adding strategic playing elements to the game.

The questions are bound to generate lots of thought and discussion. Cards include answers immediately below the statements. At the bottom of each card are scripture references plus additional notes when helpful.

Unless players are all very biblically literate, they might want to play in teams to pool their knowledge. Or a Bible study group or family might use only the questions just to sharpen their thinking or explore the connections. Some children below high school level might be familiar enough with Scripture to play, but I suspect most players will be teens and adults since this is a very challenging game.

I also need to mention that the authors have a great sense of humor that sounds like it might be from the UK. The playing pieces are little plastic brains, tying in with the word “mental” that is used twice in the game’s title. A “Preface” sheet and “Rules of the Game” have some really funny bits. In describing the “equipment” in the game they list items contained in the box, then continue: “At least it should do. If it doesn’t, you’ve been sold a pup. Oh, yes, the box should also contain a Preface and this Rules of the Game sheet. If it doesn’t, you’re really in trouble.” And you mustn’t skip over reading “Dissension in the Ranks”!

The authors have consulted 14 versions of the Bible to ensure that questions take into account the various translations. They’ve also included alternate spellings of names to that end. Questions are drawn only from the 66 books included in Protestant Bibles. All of this makes the game useful to broad Christian audiences.