Heroes and Heretics of the Reformation 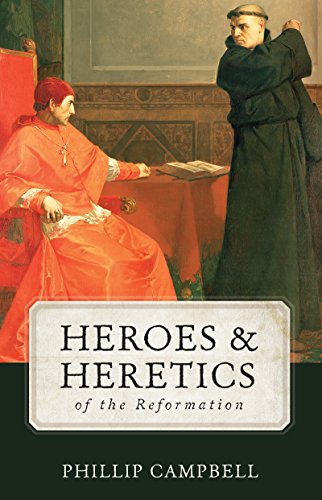 Heroes and Heretics of the Reformation uses a biographical-story format through most of the book to relate the history of the Reformation and its aftermath known as the Counter-Reformation from a Catholic perspective. This is a welcome balance to the wealth of Protestant resources addressing the topic.

Author Phillip Campbell gets into the broader history as necessary, addressing topics such as the status of the Holy Roman Emperor and the ongoing Muslim invasions. He shows how events on the larger political landscape played into and even caused religious conflicts. While this book should be easily understandable to those with minimal knowledge of the Reformation itself, the reader with some prior familiarity with the historical period will probably find it easier to place all of the characters and events. This is particularly important since politics were often more important than religion in many events attributed to the “religious wars.”

While Campbell writes as a Catholic, he doesn’t whitewash problems in the Catholic Church. His chapter on Erasmus, titled “Laying the Egg: Erasmus of Rotterdam,” illustrates the approach he takes. Campbell begins by explaining the intellectual world into which Erasmus arrived. The Renaissance had reignited interest in classical culture and ideas. Humanism arose along with the Renaissance, emphasizing “the civic and practical over the religious and theoretical” (p. 37). Humanism was partially a reaction against the Scholastic tradition and what Erasmus and others considered its rigid formalism. Erasmus, a leading light of the Humanist movement, wrote strong criticism of not only Scholasticism, but also of monasteries and monks, ecclesiastical corruption, “fasting, pilgrimages, the cult of the saints and veneration of their relics, the Divine Office, and the crudity of popular piety…” (p.43). Consequently, Protestants have viewed him as a heroic precursor of the Reformation. However, while Erasmus supported reform of the Catholic Church, he disappointed Martin Luther by not taking his side in the Reformation. As Campbell explains, Erasmus remained a Catholic, and “His later works are more pious and defensive of Catholicism” (p.51).

Heroes and Heretics is the type of book that awakens people’s interest in history. Campbell’s lively writing style coupled with intriguing information make this an excellent read. I would recommend the book to anyone who wants to know more about the period of the Reformation, but realistically, the audience is likely to be primary Catholic. Even so, anyone who reads this book should better understand the religious, political, and cultural issues that precipitated and then exacerbated the huge rupture between Christians.

Heroes & Heretics of the Reformation