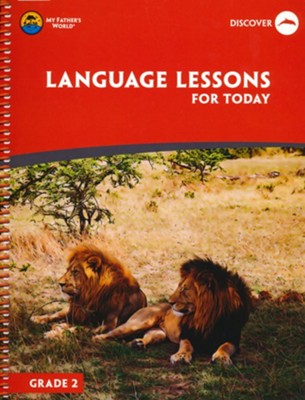 The Language Lessons for Today (LLT) series, which is adapted primarily from Emma Serl’s Primary Language Lessons (PLL) and Intermediate Language Lessons (ILL), is presented by My Father’s World in five separate books: Grade 2, Grade 3, Grade 4, Grade 5, and Grade 6. Grade 4 through Grade 6 also draw upon content from a number of other language arts books that are in the public domain. Since PLL and ILL are now in the public domain, a number of other publishers have reprinted revised versions of those books. However, My Father's World's LLT versions have the most significant revisions as well as much new content that is not in the originals.

LLT books cover all of the elements of language arts for grades two through six except reading, phonics, and spelling in the younger grade levels. The Grade 5 and Grade 6 books need supplementing for spelling, literature, and composition instruction.

The lessons should take about 15 minutes per day, three days a week. Some composition assignments past second-grade level might take longer. For example, Lesson 86 in Grade 5 says, “Imagine yourself a sailor who had come to America with Columbus. Write a letter to a cousin. Tell about the voyage and about reaching land—both the events and your emotions.” I can envision this taking more than 15 minutes for many students. Still, the amount of time required is less than that required by most language arts programs.

Note that My Father’s World builds language arts activities into other subject areas, so they don't need these courses to be as expansive as they would need to be if they were the exclusive resources for covering language arts. Some other homeschool programs function similarly to My Father's World's program and likewise require less time dedicated exclusively to language arts. This means that LLT, especially for grades four through six, might work best alongside a unit study or a program that has other composition and language arts assignments within other subject areas.

Like the original Serl books, LLT is very much a Charlotte Mason approach to language arts with its underlying presupposition that exposure to the excellent use of language is in itself an important method of learning. LLT also bears the Charlotte Mason hallmarks of narration, picture study, copywork, oral composition, dictation, drawing, and poetry memorization.

LLT starts a little more gently than the original PLL. For example, Lesson 2 requires only copywork rather than copywork and dictation. Differences in pacing are very minimal, but they do provide children a little more time and practice to acquire the necessary skills.

LLT’s content is also updated in other ways. Dates are more current rather than references to 1911 and other dates from the original books. When students learn about initials used in a person’s name, they work with names that might be more familiar such as C.S. Lewis, Ulysses S. Grant, and A.A. Milne rather than names of poets from past centuries. Letter writing and addressing an envelope reflect current usage. A letter written in cursive to be used for copywork in the original has been replaced by a letter in a non-cursive font, and that letter is a model for the student’s own letter rather than straight copywork. (This reflects the current ambivalence over cursive instruction, leaving it up to parents to decide when or if to teach it rather than assuming second graders have learned cursive.) And finally, there are more religious references in LLT than in the original books, although these references are often unidentified biblical quotations such as the exercise sentence for Grade 6 on page 103 that asks, “Am I my brother’s keeper?”

While there are significant revisions, many poems, fables, and pictures as well as lesson material from the original books have been retained. However, some editing has been done. For example, in LLT: Grade 3, a conversation between a hummingbird and a butterfly has been rewritten to remove the word “stupid,” and the conclusion to that conversation has been rewritten in what I think many would consider a more appropriate fashion. Many of the original black-and-white illustrations have been retained from PLL and ILL, but additional images have been added, including a few printed in full color in each book. Most of the added images and lessons fit seamlessly into the original material, but a few images such as the full-color “Zuni Pottery Maker” image are clearly of a different character than the originals.

Following Charlotte Mason’s recommendations, discussion is used for many of the lessons, and a child will answer many questions orally. Some questions provide opportunities for children to give either a written or oral response. You can choose which option works best for your child, especially as you first begin these lessons. Children will eventually be providing written responses, and they will also be doing copywork and drawing. You will need a separate notebook and drawing paper on which students will work. These pages should be collected into a binder.

You can choose how much copywork a child should do each day. LLT often reminds parents that a particular copywork or writing assignment might be completed over a number of days.

Parents should find LLT much more helpful to them than PLL. If a topic has been introduced previously in an earlier lesson, that lesson might be referenced at the beginning of a follow-up lesson. For example, when students are to address an envelope for the second time, the lesson references the first lesson where it shows how to address an envelope.

LLT books are not meant to be written in. You can use one book with all of your children, and there is no need to photocopy pages as worksheets. No advance preparation is needed, but parents must work closely with their children through each lesson most of the time. Suggested answers are provided at the back of each book when necessary, so no separate teacher guides or answer keys are needed.

PLL and various revisions of it have been very popular among homeschoolers. However, LLT now provides what I consider the most comprehensive and practical option with continuity over many grade levels.

You might want to check out the ready-made lesson plans from Homeschool Planet that are available for Language Lessons for Today.