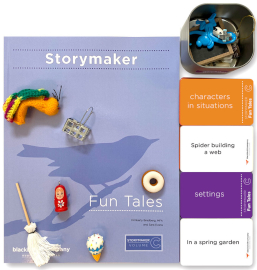 The Storymaker series gives students a solid starting place for creative writing, providing an ingenious combination of story starters and formatted pages for story writing. There are three Storymaker bundles for students in grades two through four, respectively. You can easily use any of the bundles with children who are a few years younger or older. Younger children might dictate what they want to write and tell their stories with your assistance. The three bundles are:

Each bundle includes a book, two sets of cards (36 per set), and a set of miniature figures that fit the theme of that bundle. There are brief instructions for the teacher on two pages at the front of the book. Two more pages can be used to alert students to grammar and usage issues they need to pay attention to each week. (You can use these pages or not.) Another page has more than 25 “Story Hook Starters” that children can use. The rest of the book consists of two-page spreads for children to write on for each of 20 weeks. (Nothing prevents them from continuing to write even more stories!)

The two sets of cards are labeled "Settings" and "Characters in Situations." The decks are different colors so they are easy to tell apart. Here are a few examples from the decks for Fairy Tales. The Settings cards might say something like “Through the tents,” “Over the Hedgerows,” or “At dawn in the kitchen.” Some examples from the Characters in Situations cards are, “Queen brushing her hair,” “Robber stealing gold,” and “Young boy jumping off a rock.”

Sixteen miniature figures come in a tin box for the Fairy Tales bundle I received for review. The figures include a gnome; finger puppets for a king, a queen, and a princess; plastic miniatures of a loaf of French bread, a unicorn, a dragon, a candy cane, a genie lamp, and a fairy-tail hut; and metal charms for a woman’s high-heeled shoe, a castle, a carriage, a fairy, a sword, and a knight on a horse.

Among the 27 Story Hook Starters (in the book) for Fairy Tales are “Down by the lane, the…,” “The castle glowed with heat as…,” and “When the princess lifted the lid of the…” These can be used to begin the opening sentence of the story.

Children can use any combination of a Story Hook Starter, a miniature figure, a Settings card, and a Characters in Situation card. It is probably best to let children draw the cards randomly but let them select for themselves from figures and Story Hook Starters. They should use only one of each item, and they need not use all of them. A child might draw a Characters in Situation card that is enough by itself to inspire a story, or maybe a Setting Card and a miniature figure are sufficient. Children can adapt wording on cards to suit their stories. The object is to generate ideas rather than stick tightly to the story prompts.

Here's my own example. I drew cards that gave me a setting “In her mind” and a Characters in Situation of “Queen brushing her hair.” I drew the magic genie lamp from the figures and selected “Masquerading as a…” as my Story Hook Starter. With those story starter aids in hand, I could fashion a story about the queen masquerading as someone with the aid of the genie, or I might go for the masquerade idea and skip the magic lamp.

The idea is for the child to construct a sentence to begin the story. So I might come up with a sentence to begin my story such as, “While the queen was brushing her long, black hair, in her mind she made plans for using the magic lamp she had discovered.”

The two-page spread has lines for students to write out the four possible story starter aids and another line to write their beginning sentence--a “Story Hook.” These lines are followed by the words who, what, where, when, and why, and there's a check-off box next to each one. These remind students to think through the critical elements of their story. A large box at the bottom of the page doesn’t have a specified purpose, but I think students might use it to jot down notes about the five w’s or they might draw a picture. The facing page has lines for writing the story, including a line for a title.

There are other composition resources that feature story starters, but combining the miniature figures with the cards and Story Hook Starters makes the Storymaker series unique. Children can use all four elements or they can use fewer—whatever they need to get inspired to write.