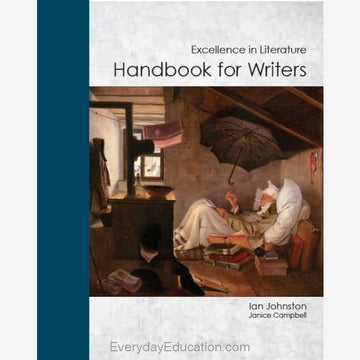 Handbook for Writers is a 420-page book that is actually a combination of two books originally written by Ian Johnston, a Canadian college professor. With Mr. Johnston's permission, Janice Campbell combined the two books, edited them for her American audience, and made a few updates and additions. Occasional references to Canada and issues of particular interest to Canadians are retained in the first half of this book.

The first half of the book, Part 1: Introduction to Essays and Arguments, presents in-depth instruction on how to write an argumentative essay or research paper. Much of this can be applied to other types of essays and papers as well.

This section begins with rhetorical arguments as it teaches students how to present an argument in a thesis statement and support it in a logical fashion. Students also learn the importance of defining key terms so that they and their readers are on common ground.

An extensive section about deductive and inductive arguments helps students think about the various ways they might organize and present their arguments. Following this are a few sections on the organization of the paper and paragraph structure. The seven sample outlines provided for both essays and research papers should be helpful to students.

A substantial section on "Writing Arguments About Literary Works" should be especially helpful for students using one of Campbell's literature courses, since students will be writing argumentative essays about the literary works they read as part of the course work. There's also a briefer section on writing literary analysis for the works of William Shakespeare.

Occasional exercises help students practice what they have learned, but Part 1 was designed more as a support and reference tool than as a series of lessons.

Part 2: Introduction to Usage and Style is divided into nine sections, within which individual topics are numbered as they are in some other grammar and usage reference books. Each entry is numbered with the section number followed by either one or two following numbers separated by periods to indicate subcategories of a higher level entry. For example, the first of the nine sections is about phrases, clauses, and sentences, and all entries in this section begin with the number 1. Entry 1.3 is about "Other Forms of Sentence Fragmentation. Following that entry are eight more entries that address specific types of sentence fragments, so these are numbered 1.3.1 through 1.3.8.

The numbering system allows an instructor to mark an error in a student's paper with only the number. The student can then look up that entry and figure out how it applies to their particular error. This strategy is very helpful for getting students to analyze their errors themselves rather than depending on a teacher to either just mark it wrong or tell students directly what their errors are.

The entries in the second part address issues that commonly arise for high school and college students who are writing essays and research papers. It is more concise than other guides, such as The Chicago Manual of Style, that try to address everything a professional editor might need to know. This makes it an easier resource for students to use.

Handbook for Writers: Excellence in Literature - Reading and Writing Through the Classics