The Good and the Beautiful 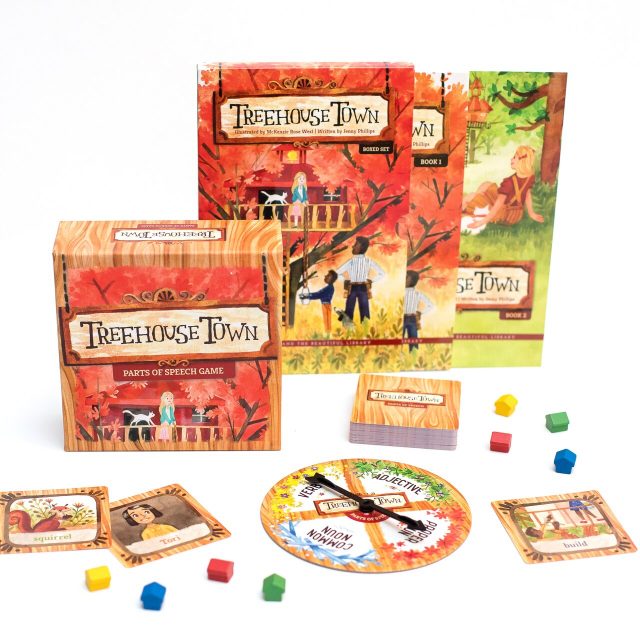 The Treehouse Town Parts of Speech Game looks deceptively simple. It reinforces a student’s familiarity with some of the first parts of speech to be learned: nouns (both common and proper), verbs, and adjectives. Using words such as basket, bright, swing, and Jake, it reinforces a student's familiarity with these first parts of speech. The Good and the Beautiful publishes this game, and they recommend it for ages six and up since they begin teaching these parts of speech in their Language Arts & Literature: Level One (for first graders).

The instructions for this game are provided in five brief paragraphs, so it's easy to learn how to play. But once you start to play you find that besides knowledge of the parts of speech, elements of chance play a major role, and strategic thinking helps too. It’s not too complicated for six- and seven-year-olds, but an adult can also play without having much of an advantage or being bored.

The game comes in a small box that contains a spinner, a deck of cards, and small wooden houses in four different colors. The spinner has four quadrants: each has a different color and is labeled with a part of speech (i.e., blue for common nouns, red for proper nouns, green for adjectives, and yellow for verbs). The goal is to collect one house of each color by having a card in your hand with a word representing the quadrant you spin when it’s your turn. For example, if the spinner lands on blue (common noun) and the child is holding a card with the word house, he receives a blue wooden house, The cards do not indicate the part of speech other than by the illustration on the card, so players have to decide which part of speech is represented by each card. (Other players can help young players if they are just learning the parts of speech.) Players hold only two cards in their hand at a time, so it can be difficult to have the right card in your hand when you need it, especially once you have already acquired two or three of the houses. Players are continually drawing new cards, so they have to figure out which part of speech each represents to determine which cards they should discard. So there’s some strategy involved along with a bit of luck.

You can buy the game on its own or you can buy it in a set that includes a slipcase with two Treehouse Town books, Book 1 and Book 2, written by Jenny Phillips and illustrated by McKenzie Rose West. In the first book, two young neighbors, Ella and Jake, discover long-forgotten treehouses built by Ella’s grandfather. They renovate the treehouses and build a few more with the help of their parents and two more children who move into a neighboring house. In Book 2, they raise money and turn the treehouses into Treehouse Town for children from a refugee center to visit. The storylines in both books deal with real-life issues in a very positive way, teaching respect for parents, care for others, diligence, and other positive character traits.

Characters and things mentioned in the books are featured on the playing cards for the game. Children don’t need to know the story to play the game, but if they do, they’ll get that much more pleasure from the game as they recognize the card with the word “Charlie” and a picture of Mr. Wood’s dog Charlie, or the card with the word “book” showing Ella’s grandfather’s book with drawings of the treehouses.

I don’t usually review storybooks like these, but they are well written and they work together ingeniously with the game so well that I recommend buying the set with both the game and the books.