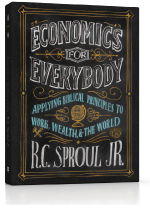 R.C. Sproul Jr.’s engaging speaking style combines with first-class graphic design and lots of film clips from old movies, newsreels, and historical films for this worldview-based economics course. Film footage is an interesting assortment of public domain content, such as Charlie Chaplin and Buster Keaton movies and other silent films, plus newsreels from WWII. It's often quite entertaining. On the other hand, there is also some footage of Holocaust survivors at the end of the war, starving people, and other troubling images that highlight the reality of economic systems and choices and their links to worldviews. Parents should preview the film footage, but I didn’t see anything that I thought was inappropriate for Christian high school students.

Sproul advocates a free-market economic and political philosophy based on biblical principles (Reformed Protestant), and he demonstrates how atheism tends to lead to government-controlled, socialized economic systems. Sproul takes the time to make the distinction between communist socialism and fascist/nationalist socialism and shows how these and other forms of socialism allow just a few people to control the entire economic system of a country. He brackets free market and socialist systems around interventionist economic systems such as we have in the U.S., discussing the danger involved as we move toward an increasingly socialistic system.

This course might be considered a philosophy of economics course more than a typical high school economics course. It doesn’t deal with budgeting and banking other than as they play a role in economic systems. Instead, it deals with topics such as those mentioned above plus the biblical origins of economics, sin’s effect upon economics, scarcity, private ownership of property, tools, markets and trade, capital, profit, inflation, depression, redistribution of wealth, and the biblical concept of dominion.

The course is presented in twelve videos on two DVDs or via streaming. Segments vary in length from 15 to 27 minutes. The course includes a 266-page digital study guide, available in PDF, MOBI, and ePub versions as well as ePub and MOBI versions featuring OpenDyslexic, a dyslexia-friendly font.

For each chapter, the study guide provides an introduction, Scripture readings (generally one or more complete chapters rather than isolated verses), a list of objectives, a review of the main ideas from the lecture that is sometimes expanded with extra information not presented in the videos, and questions. Students should first watch the video, then read through the study guide and respond to the questions. Questions for each chapter generally include five multiple-choice questions, three or four short-answer questions that might require a paragraph-length response, and three or four discussion questions that could also occasionally be used for essay assignments. The answer key is included in the study guide.

Each chapter of the study guide also lists optional reading assignments in three recommended textbooks. While the course has substantial content, students seeking course credit do need to use an additional text to cover what they should learn for high school economics. The recommended textbook, Basic Economics, 4th edition (by Carson and Cleveland) is available through Compass Classroom and other sources.

The streaming option can be purchased for only this course, but you might want to consider purchasing a Compass Classroom Membership if you are interested in a number of Compass Classroom courses. Subscriptions for streaming access are for one year.

I like the content and presentation of the course, and I think it works particularly well for worldview education since it covers some key worldview concepts. Unlike other economics courses, Sproul concludes with a call to action for Christians to understand and resist the temptation to urge government intervention that leads toward socialism because we like a particular goal or program. He encourages political action, especially at the local level so that Christians can influence government from scriptural principles based on both a limited-government view and care and concern for the needy.

You can view a free sample of both the video and the study guide as well as two free lessons on the publisher's website.

Note that this course is available as part of Compass Curriculum Membership--a subscription service that gives you access to this course plus many others. Click here to learn more about the Membership.

Click on the image to check out the premade lesson plans from Homeschool Planet for the Economics for Everybody. You can sign up for a 7-day FREE trial.