StartUp: A Business Game for All Ages 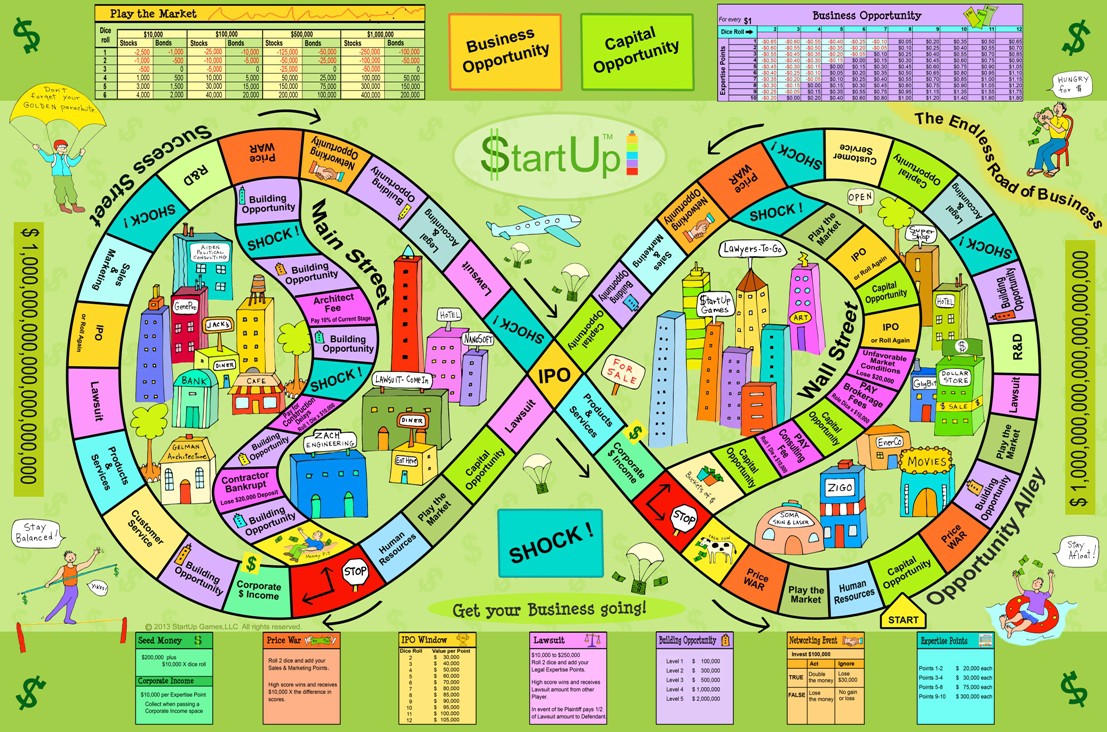 StartUp is a surprisingly versatile game that teaches the basics of growing a business. The game was created by a former investment banker, Michael Ehrenreich, his wife, and his sons. In most situations, children as young as nine can play, but it can also be an adult game. More knowledgeable players will probably be more strategic and thoughtful in their play, but elements of chance level the playing field for those less familiar with the business world. Players should be fairly proficient in basic math skills: addition, subtraction, and multiplication, but someone can assist a child with the math if needed. Two to four people can play at one time. Someone also has to read through the eight-page instruction booklet and explain to other players how the game is played. It should take no more than 15 to 20 minutes to set it up and figure out how to play.

There is a large game board with quite a few components to set up for play—play money, three decks of cards, Company Player Boards with holes for pegs that track business growth and ownership, cubes that represent your company’s physical building, and more. The board and components are very colorful and attractive.

This is a complex game; think of Monopoly on steroids. Players can work strategically toward goals, or they can take a more laid back approach and hope that elements of luck work in their favor. For example, planning ahead for an IPO might pay off handsomely, but accepting a random bid from an investor (an option that might come up on a card that a player draws) might preclude the IPO option while providing an immediate infusion of cash—much like in real life.

Young children are not likely to understand all of the elements of business building, but they will grasp buying and selling, penalties and bonuses which are the essence of the game. And they will learn more about business as they play. An occasional bit of instruction about business might not be amiss during the course of the game, but I wouldn’t interrupt play to explain everything. You might never finish the game!

I expect that the first time anyone plays the game they will make some poor decisions simply for want of understanding about the best strategies for this game. For example, early investing in “expertise pegs” (which represent investing in products and services, human resources, sales and marketing, legal and accounting, research and development, and customer service) pays off in a number of ways as you play the game that are not obvious at first.

A player who understands what it takes to grow a business to the multi-million-dollar level, will recognize most of the necessary components of successful business building in the game: start-up money and expertise divided into the six areas listed above. While expertise and money can get a business going, it has to grow from there. Spaces on the board offer growth and risk opportunities such as selling part of your company to raise capital, networking, investing in the expertise areas, playing the market by purchasing stocks or bonds, borrowing money, investing in your physical building, and taking a company public through an IPO. To make things even more interesting, there is the possibility of lawsuits, price wars, and “shocks to the system” when you draw a “Shock” card.

The object of the game is to complete your five-level corporate headquarters building, paying for each level in cash as you are able. Instructions provide options for shorter games that might be played within a specified time limit or might require the winner to build the corporate building to only three or four levels. Also, it seems to me that you can easily skip lawsuits and price wars when you first play, but then add these elements as players become more familiar with the game. It will take at least an hour to play, but it might take much longer, especially with four players.

On the educational side, there are numerous charts and graphs—some around the edges of the board and two large charts separate from the game board. Players need to refer to the various charts throughout the game, so they need to learn how to interpret them. (Younger players will need some assistance at first to figure out how to read these.) There are elements of probability to consider as players make decisions. Players should learn to make some cost/benefit analyses before making some of their decisions, but these are more likely to come with experience. They have to learn how much money they should risk with various investment opportunities. Players will be adding and subtracting as they work with the money. They occasionally have to multiply the roll of a die by 10,000 to find out how much they will pay or earn. They learn about percentages as they consider what percentage of their company they might be willing to sell. The investments, cash on hand, and percentage of ownership remaining are all factored into the calculation to determine the winner at the end of the game.

You might be interested in the free apps that are available for both iOS and Android platforms. The apps are specially designed for StartUp and do the calculations for you on some of the more complex game activities. Of course it’s up to you decide how frequently to use the app, but it might prove helpful in some situations.

It is possible to play the game without exploring the meaning of all of the elements, and an explanation of the elements is not included within the game since that would require an entire book. So you might need to do some research of your own to be able to explain the game well. However, I think that if you use the game with children and teens, it would be good to explain at least one or two elements each time you play the game.

I need to add a note about the box itself. The game comes in a sturdy game box, and within the box is a plastic molded insert that was carefully designed with individual spaces for all of the game components—everything stays in place without requiring extra rubber bands or baggies except for the pegs which come in their own zip-loc baggie.

StartUp seems to be well thought out. It offers significant learning opportunities on multiple levels that should be fun as well as educational for homeschooling families.