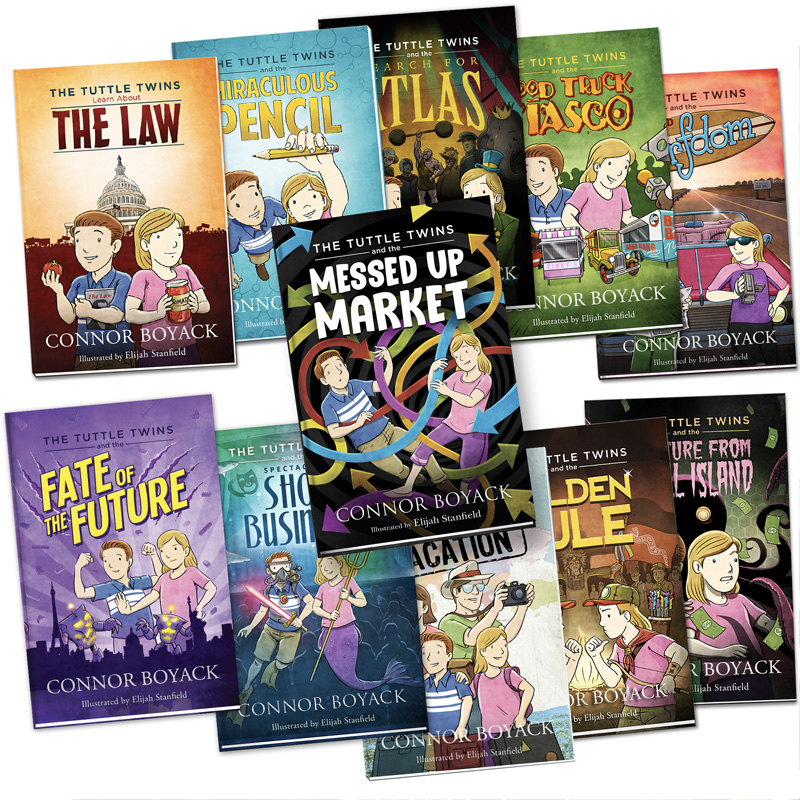 Connor Boyack has created The Tuttle Twins books, an outstanding series of 12 books that teaches important concepts about economics, government, and personal responsibility through child-friendly stories. Boyack has taken important ideas from well-known books and authors and translated them into a very appealing format.

Boyack says the target audience is ages five through ten, although he acknowledges that teenagers have found the books interesting as well. While these books are great to read aloud with the family, nine- and ten-year-old children should be able to read them on their own.

These books feature stories about two children, Ethan and Emily Tuttle, along with their friends and family. Each book is only 60 pages in length, with half or more taken up with full-color illustrations. On top of that, the text is in a large font, all of which means these books can be read quickly and easily.

Boyack’s goal is to advance belief in limited government, personal responsibility, and individual freedom–ideas supported by conservatives and libertarians. No religious views are presented. While the books work best if read in order since some principles relate to one another, this isn’t absolutely essential. I list them in order here.

The Tuttle Twins Learn About The Law advocates the idea that governments should be held to the same standards of morality as everyone else. Based on Frédéric Bastiat’s famous book, The Law, this book argues that governments should not take from some people by forcible taxation to give to others since it is, in effect, stealing, and it is just as wrong for governments to steal (through taxation, fees, etc.) as it would be for an individual to do so. This sounds like lofty stuff, but it’s presented through the story as their neighbor Fred uses the example of his own home-grown tomatoes. What if his neighbor Mrs. Lopez takes some without asking? Is that right or wrong? If it’s wrong, does it become right if Mrs. Lopez gets her police-officer uncle to help her take them? Essentially, he is asking if something becomes right when it’s done by a government official. Boyack doesn’t go too deep on this example, but he later discusses the idea that government can be the bad guy by plundering and bullying citizens, and this is wrong.

The Tuttle Twins and the Miraculous Pencil is the amazing story of the process that it takes to create something as simple as pencils, and how it demonstrates the need for free markets and cooperation. This book is based on Leonard Read’s classic essay, “I, Pencil.”

The Tuttle Twins and the Food Truck Fiasco demonstrates how companies sometimes get governments to pass laws that restrict their competitors and benefit themselves. Ideas in this book draw from Henry Hazlitt’s Economics in One Lesson.

The Tuttle Twins and the Road to Surfdom exposes the dangers of central planning. This story draws on just one key idea from F. A. Hayek’s, The Road to Serfdom, a book that shows how the expansion of government control reduces individual freedom.

The Tuttle Twins and the Golden Rule is about treating others the way we want them to treat us. Boyack attributes the Golden Rule to many cultures rather than just the Bible. He references Ron Paul’s A Foreign Policy of Freedom as a source for this and similar principles.

The Tuttle Twins and the Search for Atlas shows how socialism reduces personal responsibility and ambition through a story about Atlas, a circus performer who decides to leave the circus when those who produced positive results for the business started being rewarded at the same level as those who did not. The inspiration for this story is Ayn Rand’s book, Atlas Shrugged.

The Tuttle Twins and Their Spectacular Show Business moves into the personal realm of entrepreneurship and competition as the twins decide to start their own community theater, and then have to deal with a competitor. Dr. Israle Kirzner’s Competition and Entrepreneurship is referenced as a scholarly source for more on this topic.

In The Tuttle Twins and the Fate of the Future, the twins watch a dystopian movie where a coercive government is in control. It draws on Murray Rothbard's Anatomy of the State to help children consider how people can coexist peacefully in societies without heavy-handed government.

The Tuttle Twins and the Education Vacation exposes enormous problems resulting from our government-controlled system of education, contrasting that with a vision for educational freedom. John Taylor Gatto's ideas from The Underground History of American Education underpin this book.

The Tuttle Twins and the Messed Up Market explores the difficulties of creating a small business, the choices an entrepreneur has to make, and some of the influences that can cause them to make good or bad choices. Human Action by Ludwig von Mises is the sourcebook.

The Tuttle Twins and the Leviathan Crisis addresses current problems such as the denial of truth and the used of demagoguery to inflame prejudices, while also addressing the alarming growth of the federal government. It is based on the book Crisis and Leviathan by Robert Higgs.

A glossary and four to six discussion questions are at the back of each book. Parents will need to decide which questions are most appropriate for their children since some get into deeper ideas than younger children might be ready to consider. Topics covered in these books fit readily under the heading of government and economics, but you could also use these as part of your social studies.

There is also an optional set of parent guides, one for each book. Each parent guide has background information about the topic of the book and the author of the source book. There are also suggested answers for the discussion questions.

For each story, there is a companion workbook, only available as PDFs. Workbooks have a variety of puzzles, coloring pages, worksheets, group activities, discussion questions, writing assignments, and games. Some workbook activities are suitable for non-writers while others cover various higher levels, even into high school. For instance, a kindergartner can color a picture while a fifth-grader fills in blanks to create a Mad Lib, and a teen writes a 300-word paper. Don’t miss the fun-food recipe at the back of each workbook!

Advertising for this series says, “Our unique book series introduces important ideas that schools no longer teach." Sadly, this is too true; most children are learning that socialism and reliance on government is the norm rather than personal responsibility and communities caring for one another. The Tuttle Twins series is a great resource for the entire family to learn and discuss these important topics.