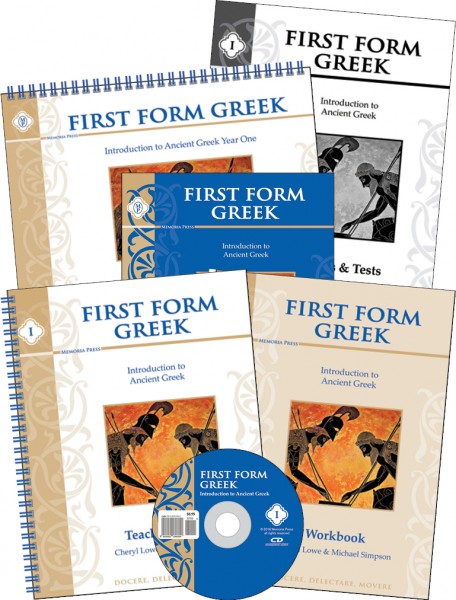 First Form Greek might be used with students from about eighth grade through high school. While in many ways similar in format to Memoria Press’ First Form Latin, First Form Greek also teaches the Greek alphabet and other distinctives of the Greek language that students do not need to learn for Latin.

The authors recommend that students study at least two years of Latin before beginning First Form Greek so that they become familiar with concepts such as declensions, conjugations, gender, and cases that are essential to inflected languages. Prior familiarity with the Greek alphabet is also helpful.  Resources such as Greek Alphabet Book (from Memoria Press) or Greek Alphabet Code Cracker might be useful for this. While you can extend your time in the first lesson of First Form Greek, which reviews the Greek alphabet, the exercises and activities in the other resources are likely to make the process easier.

While this is an introductory course, it covers a lot of ground. It teaches about accents and breathing marks, the first and second declension nouns, six indicative and active tenses of "omega verbs" while also covering pronouns and adjectives. The course introduces about 130 vocabulary words, and these are listed in two glossaries, English-Greek and Greek-English.

The course consists of 26 lessons plus five unit reviews. Each five-day lesson includes oral drill, presentation of new material, workbook activities, and a quiz or test. Workbook activities include word study and grammar, learning a Greek saying (optional), vocabulary, cognates, conjugations or declensions, form drills, and translation work. There is plenty of practice and reinforcement in the course as well as cumulative review.

First Form Greek was designed for a classroom setting. While a group of two or more students is ideal, the course can still be used one-on-one. Lessons are intended to be taught, but the teacher need not have previously studied Greek. He or she can learn with students. Even some of the workbook activities should be done interactively. The CD is primarily for pronunciation, but the track for the first lesson has extensive explanation.

Lessons include both classical and Christian content. Optional prayers to learn in Greek are at the back of the student book.

The basic set consists of the student text, the student workbook, the teacher manual, the teacher key, a set of quizzes and tests, and an audio CD. The CD is primarily for pronunciation, but the track for first lesson has extensive explanation that should be especially useful for those who have not completed a primer on the Greek alphabet. Explanations are complete enough that those who have not previously studied Greek should be able to teach it. If you are not going to use the video instruction included in the complete set (described in the next paragraph), you really need to work through each lesson before teaching it.

The complete First Form Greek set adds teaching DVDs and flashcards. Video lessons are also available online instead of on DVDs. The teacher manual seems to indicate that video lessons are used in addition to “in-person” teaching, with students using the video for review purposes on the fifth day of a lesson. I expect that homeschoolers are more likely to substitute the video instruction for their own, watching along with their students. Video lessons follow the progression of the lessons in the student text and teacher manual, but they add additional explanations. Use them however they work best for your situation. Even if you rely on video instruction, it is still important that a parent or teacher work through recitations and some workbook activities with students.

First Form Greek is a substantial course that would be suitable even for adults. Since it serves as a beginning course, the authors recommend following it with A Primer of Biblical Greek by N. Clayton Croy.