Getting Started with Latin, with French, or with Spanish 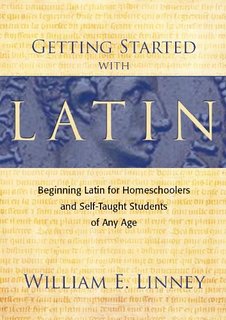 The Getting Starting with… foreign language series began with Latin then branched out to Spanish and French after the method proved popular with homeschoolers. The primary author, William Linney, wrote the Latin text by himself then enlisted the help of other authors with the Spanish and French courses.

Subtitles on each book read: Beginning Latin (or Spanish or French) for Homeschoolers and Self-Taught Students of Any Age. Each course is contained in a single book and should work well for independent study for students in junior high and beyond. Younger students will likely need assistance.

Free MP3 audio files on the publisher’s website provide the pronunciation of all new words and exercises. There are also MP3 files with the authors’ explanations for each lesson that you can use as needed. Since the publisher maintains only a Facebook page for the entire company, but has independent sites for each book, I’ll provide the links to the MP3 files here: Latin, Spanish, French.

Aside from the extra pronunciation lesson at the beginning of the French book, lessons begin very simply by teaching just one or two words or a simple concept. For example, Latin begins by teaching the word nauta (sailor). Lesson two explains the lack of articles in Latin, and the third lesson adds the word sum and presents the translation exercises “Sum.” and “Sum nauta.” In this course, as well as in the Spanish and French courses, lessons introduce no more than one or two new words or phrases per lesson.

Getting Started with Spanish begins by teaching about English articles, then the second lesson explains that Spanish nouns all possess a gender. The third lesson introduces the first Spanish word, el (the).

Getting Started with French begins in a manner similar to Spanish, introducing the concepts of articles and gender before tackling any new vocabulary.

Some lessons will take no more than a few minutes each at the beginning of each course, so a student might complete a number of these lessons in one sitting if they wish to. However, with younger students, you should keep the pace slow and gentle.

Once past the first five to ten lessons, students have learned enough vocabulary to begin work with a number of phrases or sentences in each exercise. The amount of time required increases significantly as lessons become more complex and challenging.

Exercises for most lessons direct students to translate from the foreign language into English. The authors suggest that students write their translations in a separate notebook. (Adults might answer mentally if they wish.) For added challenge, students could be asked to translate the answers back into the foreign language. This is mentioned in the introductory material, but you might want to make a special note to remember to try this with older students since the technique is not mentioned in the lessons.

There are no quizzes or tests, but the authors suggest simply backing up to a previously completed lesson or, if it isn’t too difficult, have students translate from the audio recordings into English.

The courses are grammatically based, teaching each language in an organized fashion and explaining points of grammar and structure while introducing a basic vocabulary. While students learn conversational sentences, the courses are not taught from a strictly conversational approach.

At the back of each book are an answer key, a pronunciation key, a glossary, and a subject index. However, the Latin text has two pronunciation keys covering both ecclesiastical and classical pronunciations—choose whichever you prefer. (MP3 recordings for Latin are available in either pronunciation style.)

On the other hand, the courses are great for students and parents who don’t know the foreign language. (I especially appreciate the explanations that don’t assume that the parent or teacher is fluent in the language, especially the pronunciation help for French!) Parents should be able to easily keep up with younger students if they work together through one of the courses. Print is large enough in the books that a parent and student should be able to read together sitting side by side.

In addition, the free audio recordings might prove very helpful. If you use both the book and audio recordings, you are getting a substantial course for an amazingly low price.

The Getting Started with… courses seem like they should be especially good for middle school students, and they should also work well as introductory courses for high school students (or adults) who might be overwhelmed by more comprehensive high school level courses. If they can master this gentle introduction, they should then find it much easier to move on to a more challenging course. I also see on the internet that parents with children as young as seven and eight have successfully used the Latin and Spanish courses.

available in print or kindle formats

Getting Started with French

Getting Started With Spanish

Getting Started With Latin