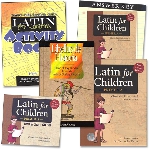 The Latin for Children course centers around a series of three primers (labeled Primer A, Primer B, and Primer C) that can be used with children third grade and up. While the primers are the core element of the course, you also need both the activity book and the answer key for each primer.

This series is especially good for the parent with no Latin background. The lessons speak directly to the learner, so the parent/teacher does not have to present the material in his or her own words. The writing style is very engaging and easy to understand.

The 32 lessons in each primer are grouped into units that each deal with a particular topic such as second declension nouns, pronouns, or numbers. There are from two to five chapters per unit with an additional culminating review chapter at the end of each unit. The final chapter of each primer is a "Yearly Review" that both reviews and quizzes students on everything taught that year.

Each primer features a different historical era with readings, stories, images, and reference material. Primer A relates to Ancient Rome, Primer B to medieval Europe, and Primer C to the age of exploration and early American history.

In addition, each primer has extensive appendices. There are two glossaries: one arranged chapter by chapter (for new vocabulary as well as for review vocabulary) and the other alphabetically. Reference charts for all conjugations and declensions taught are mixed with chant "flow charts" for memorization and recitation. The chants appear in lessons where they are taught, but this provides an easy reference if children forget them.

Classical Academic Press has been revamping this series with both Primer A and Primer B already updated. While the core of the course remains the same, the Latin for Children Primers are now printed in full color on pages with text as well as in cartoon illustrations, reproduced artworks, and other images. Adventure stories thread through the lessons in both Primers A and B, both following the adventures of two children, Marcus and Julia. Stories use a diglot weave approach using mostly English with some Latin words thrown in. The amount of Latin gradually increases. Diglot weaves help students learn Latin vocabulary from within an English context. In Primer A, although Marcus and Julia innocently set out to look for dropped coins, they find themselves the unwitting possessors of an important scroll vital to the Roman government and of interest to its enemies as well. In Primer B, Marcus and Julia are shipwrecked on the shore of medieval England and have to make their way to London. Students should very much enjoy the stories.

Each activity book correlates directly with lessons in the primers. Three activity pages per chapter (including activity pages for review chapters) present mazes, word searches, and crossword puzzles as well as many other types of activities that are not easily labeled. These are truly challenging learning activities rather than simple busy work. I suspect most students will really like them, but with three to select from each week, you can always skip one if it doesn't appeal to your child.

Children chant aloud the lesson material as they work through each chapter. A parent or teacher needs to be present to coach children or make corrections as they practice their chants. Classical Academic Press says that Latin for Children is integrated with Shurley Grammar. This is not lesson by lesson correlation, but rather a purposely-designed similarity in methodology. They explain on their website: "We use the same abbreviations for the parts of a sentence, teach similar parsing methods for breaking a sentence down into its parts and make use of similar terms, concepts and definitions wherever possible. The theory is that students needn't be taught one set of terms and abbreviations in Latin class and another in English class." This makes Shurley Grammar a perfect companion for those who choose Latin for Children. Nevertheless, you can still use a different grammar program if you prefer.

Alternatively, children can use the DVDs or streamed videos. You can choose either classical or ecclesiastical pronunciation videos. Even though ecclesiastical pronunciation can be used throughout the course, Christian content is very minimal. The chants are to be practiced repeatedly throughout each week. New material is introduced incrementally within each unit so lesson instruction on a new concept within each chapter is relatively brief. Students complete some written exercises within the primers, and they discuss or answer some questions aloud.

An optional supplement that many parents will find useful is the DVD/CD set for each primer. You have a choice of DVDs/CDs or streamed content. Both options feature Dr. Christopher Perrin teaching students new concepts for each chapter as well as the chants and vocabulary. There is more content here than is presented in the books, so I encourage you to use them. Note that in the instructional videos Dr. Perrin primarily uses the classical form of pronunciation. Parents and students might watch these together, or parents might watch to learn how to teach the lessons themselves. Note that the new teaching videos for Primer A and Primer B are now in high-definition in both streaming and DVD formats. Level C will eventually be updated in the same fashion.

The streaming option has extras for each chapter. While I didn't check for every lesson, most of these are brief puppet melodramas that are corny but amusing. These melodramas use the same diglot weave introduced in the adventure stories.

Two CDs for each level (or the streamed content) include all of the chants—one presented with classical Latin pronunciation and one with ecclesiastical pronunciation. Choose which pronunciation you prefer. On the videos, students can watch as children and instructors add motions and body language.

Another optional but useful supplement is the Latin History Readers, one for each primer. The first reader begins with individual sentences rather than paragraphs to translate. The historical content correlates with Veritas Press's history cards: The first reader matches the Veritas cards about halfway through the set on the New Testament, Greece, and Rome. The second reader works with the Middle Ages, Renaissance, and Reformation cards. The third reader should be used with the Explorers and Early American History cards. This correlation is useful if you want to teach with the Veritas cards at the same time, but Latin for Children is not dependent upon them. The Classical Academic Press website has a number of free resources that you might use to enhance the program. Flash Dash Latin is a free online computer game for Latin review. Additional exercises, quizzes, and tests for Primer A and additional exercises for Primer B plus answer keys have been submitted by a number of Latin for Children users. A suggested weekly schedule for the complete Primer A bundle is also available.

Latin for Children is very thorough and easy to understand. It doesn't dumb down the content for the young audience, but it presents lesson material in manageable chunks with plenty of practice, repetition, and review. Students learn 240 new words in each primer, and by the end of Primer C, they will have covered all five noun declensions and all four verb conjugations, six verb tenses and much more. This content is equivalent to about a year and a half of high school level Latin. While Latin for Children could be used for high schoolers, there are more efficient programs that target older students. Latin for Children is very easy for teachers to use without lesson prep time. Older students might even be able to work through lessons on their own.

While you can purchase individual items, ideally, you should start out with all of the components. Check the publisher's website for all of the purchasing options.

Note that it appears that Primer A and Primer B have the same ISBN for both the original and revised editions. The revised edition shows a boy reading a scroll on the front, and the revised Primer B shows a girl scanning the horizon.

You might want to check out the ready-made lesson plans from Homeschool Planet that are available for Latin for Children.

Latin for Children: Primer A Text

Latin for Children: Primer B Text

Latin for Children: Primer A Pack