Latin in the Christian Trivium 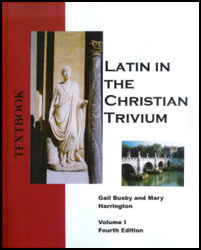 Latin in the Christian Trivium is a four-year traditional Latin program with some unusual elements. First, it's a Christian program, using excerpts from the Vulgate translation of the Bible for some of the translation exercises rather than the traditional approach that uses ancient Roman writings dealing with war and pagan mythology. It does include a few passages from Caesar and Cicero so that students will have some exposure to the classical style of Latin. It also incorporates quite a bit of history and geography so students become familiar with the classical culture. Ecclesiastical pronunciation is used on the companion CDs (one for each volume).

Since the authors are Protestant, the vocabulary does not include some of the religious vocabulary common to Latin programs with Catholic origins. The program should work well across denominational lines. The only thing I spotted that might be at all controversial among Christians was "The Gospel Road" exercise listing key points of the gospel, all quoted from Scripture. (Some might argue that other points ought to be included.)

The second unusual element is that while these courses use paradigms, memorization of conjugations and declensions, and other hallmarks of traditional courses, Latin in the Christian Trivium also uses a key element of the Principle Approach, creation of a student notebook. Students write in their notebooks such things as Latin phrases and their translations, declension and conjugations "charts," and vocabulary words. Notebooks also are used to store study sheets, drill sheets, exercises, and tests.

A third element, creation of a vocabulary card file, was borrowed from Writing Road to Reading methodology. It results in a collection of flashcards for easy and frequent review.

A fourth feature that enhances the program was inspired by the Ecce Romani textbooks—a continuing storyline about a Roman family. However, this story is based on an actual historical figure, the Roman centurion we encounter in the gospels. The centurion is given the name Romulus Fidelius, and he is blessed with a family who accompanies him as they move to Rome, then from Rome to Judea where he encounters Jesus. Thus, the story serves as a means of tying together the Roman culture and historical Christian/biblical content with an apologetics flavor.

The ongoing story and use of Scripture make this course most markedly different from secular courses in the third year where students typically get a heavy dose of Caesar, Cicero, and mythology.

In addition, lessons have extra sections devoted to special topics that arise in relation to the readings. Students might learn about Roman law, Gnosticism, emperors of Rome, Jewish feasts, and other topics that enrich their understanding.

Probably one of the most appealing features for many parents will be that the program is designed so that even teachers with no Latin background can easily teach it. In fact, older students can probably work through the volumes independently for the most part. Parents will probably need to go over some of the initial work, ensuring that students create their notebooks and vocabulary card files properly. They need to also make sure students understand the basic lesson procedures. These are laid out in very clear detail in each teacher's guide on a single page at the beginning of each chapter.

For most volumes of the program there are a full-color student textbook; a Study, Drill and Test Sheets booklet; a teacher's guide; a pronunciation CD; and an optional activity book. The activity books feature crosswords, logic puzzles, word searches, mazes, and other such activities that reinforce vocabulary. These are certainly useful but not absolutely essential.

Each teacher's guide includes a teacher's resource CD-ROM with important resources. Among them are tests, a set of 11 maps used with all four volumes, color-coded helps for students working through the first two volumes to help identify cases and parts of speech, and both PowerPoint and PDF presentations for each lesson. The lesson presentations might actually do a great deal of the teaching for you. Supplemental Aesop's Fables for translation are included on the Volume I teacher's resource disk along with vocabulary lists, color-coded help sheets, and translations for the teacher.

The teacher's guides include all the student text pages including study sheets, drill sheets (which might have been called exercises), and answer keys. Answers are overprinted in a different font. Complete translations are provided where such assignments are given. The books I received also came with a brief "Quick Start Guide" telling you what materials you need and how to set up a revolving two-week schedule for covering each chapter.

My impression is that this is a very solid Latin program that is likely to be effective because of the multiple methods used to reinforce learning. However, those multiple methods do mean that students are required to do quite a bit of writing along with significant study and memorization.

You might begin the courses with junior high students, but these really are high school level courses on a college prep level. At the end of the third course, students are supposed to take the National Latin Examination for either or both of Latin II and III. One such exam for Latin II is included as a study sheet. Aside from familiarity with mythology, students should be well prepared for these exams. Volume IV spends much more time on the translation of classical authors' writings; it is labeled as the "Honors Edition." There's also an optional Advanced Placement Latin, XS Edition that focuses specifically upon The Aeneid and Caesar, plus other secular writers, with the goal of helping the students to pass the AP College Board test.

Students planning to apply to one of the UC system universities in California will appreciate that the courses have been "accredited" by the University of California for high school credit. (UC schools are unusual in requiring students to use only approved textbooks and courses for high school.)

Although the program really looks easy to use, the authors have made available free online tutoring assistance if a student needs help.

The prices might seem a bit high, but when you actually get into the courses, you will find that the prices are fully justified. In addition, the publisher has worked to make them more affordable by now offering the Latin textbooks in an ebook format. Even better, ebooks include hyperlinks not available in the print books.

Latin in the Christian Trivium Volume I Pronunciation CD

Latin in the Christian Trivium Volume I Study Sheets, Drills