Olim Once Upon a Time…In Latin: Derivatives 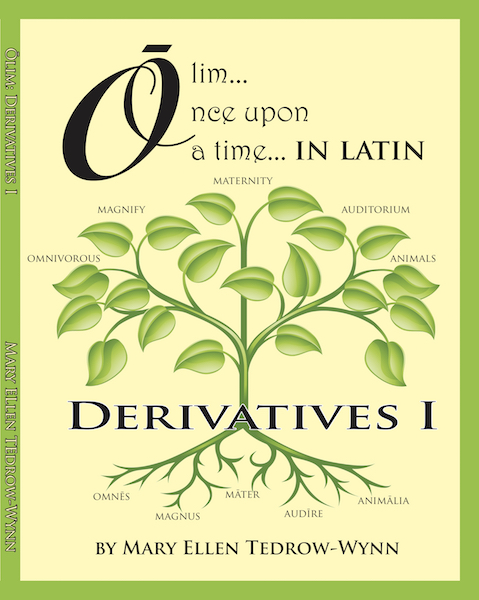 Each book has 15 lessons, and each lesson should take two weeks to complete. That means you will probably complete one book per school year.

There are seven parts to each lesson plus two review activities after every fifth lesson. There should be ample time to fit the review activities within the two-week period of a regular lesson, so each book should take 30 weeks to complete.

Each lesson begins by introducing ten Latin words. These might be nouns, verbs, or adjectives. Most Latin words are presented in more than one form, something that might be confusing to students who are not studying Latin or another inflected language. For example, the Latin adjective meaning one is presented as unus, una, and unum since the Latin adjective’s ending will change to agree with the masculine, feminine, or neuter noun that it describes. The charts showing the ten new words include their meanings, and lists of English derivatives for each word.

The following two pages duplicate this information in charts that are arranged differently. This time, students trace over dotted-line, cursive words to complete the charts themselves. With students beyond third grade, I would probably have them copy the information into a notebook rather than have them trace the cursive models.

The second activity for each lesson, called Exercise I, asks students to fill in the blanks in sentences with derivatives from the list. Students might need to consult a dictionary for the meanings of some derivatives.

Exercises II, III, and IV should be much quicker than the first two activities. In the second exercise, students draw lines to match up columns of about ten derivatives with their Latin source words. The third exercise asks students to fill in the blanks in a story using derivatives listed as a word bank at the bottom of the page. In the fourth exercise, students identify the meanings of derivatives from multiple-choice answers.

You will need to plan more time for the fifth exercise since it asks students to “write a story using as many words from this lesson as you can. Underline the words you use.” This is likely to be a lively, creative writing activity.

The sixth exercise is either a word search or crossword puzzle. Students will either search for or write in derivatives. Crossword puzzles include the original Latin word in parentheses next to each clue.

The review activities after every fifth lesson ask students to write one derivative for each of twenty Latin words. Then they are to write ten sentences using derivatives they included in the first review activity.

Each book adds an activity with Latin prefixes after the final review. A glossary of the Latin vocabulary words taught in that book follows the Latin prefix activity.

Books are not reproducible, so each student needs his or her own book. Students should be able to work independently through the Derivatives books.

The lessons target students in fifth and sixth grades, but they can easily be used with older students up through high school, and they might be used with some younger students as well.

In some ways, these courses depend upon how much effort a student is willing to invest. The more time they spend becoming familiar with new words and using those words in their stories and sentences, the more they will learn. Still, the majority of the exercises have predictable answers, and students will nevertheless benefit if they stick with familiar words for their stories and sentences.

Once Upon a Time (Olim in Latin) Derivatives I

Once Upon a Time (Olim in Latin) Derivatives II