This is one of my 103 Top Picks
Wonky Star Ltd. 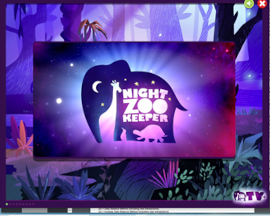 Night Zookeeper is a highly engaging, online language arts program for ages six to twelve. The program includes work on composition, grammar, spelling, keyboarding, vocabulary, and reading skills. It is not comprehensive and systematic, so you will probably use it as a supplement rather than your core curriculum. The publisher recommends that students spend a minimum of 30 minutes a week working in the program, but for the best results, they should spend a few hours per week.

The appearance of Night Zookeeper is similar to that of a high-quality gaming program with colorful characters and backgrounds. It should work on most computers, tablets, and phones. Storylines that pop up from time to time are based on the series of Night Zookeeper chapter books that feature characters such as Will, the Night Zookeeper; his friend Riya; and Sam, the giraffe.

Students are assigned a user name generated by the program, so they are anonymous. The student’s age is entered when parents first sign them up. This allows the program to give them age-appropriate assignments that gradually become more challenging. For instance, students ages five and six learn how to use capital letters to begin their sentences, how to use proper nouns, and how to identify and use synonyms. They also answer simple reading-comprehension questions for short passages. In contrast, students eight and nine years old learn how to use conjunctions in compound sentences, how to use the apostrophe to indicate possession, and how to make inferences by reading between the lines in a story. At the highest level, students learn such skills as using correlative conjunctions (e.g., either/or), writing with alliteration, explaining figurative language used by an author, and using more sophisticated transition words in their writing (e.g., furthermore and additionally).

Students build a collection of Night Zoo animals as they complete lessons, exercises, and games. They will create some of their own characters by using simple drawing tools built into the program or collect animals drawn by other students—paid for with “orbs” they have earned. Orbs can also be used to customize their animals with accessories, and students are occasionally given the opportunity to create their own at no cost. Students also have to defend their zoo against the spidery-looking Voids. Each character needs to get “leveled up” to be strong enough to fight the Voids. (See the section on “Battles” in the online Parent Guide for useful information about how to win battles.) Leveling up is also accomplished by using orbs students have earned. It is important to point out that the battles are not a major part of the program. Most of the time is spent on educationally useful activities.

One of the primary goals of the program is to give students plenty of opportunities to write. Sometimes they write individual words or phrases, but they will frequently be asked to write paragraphs. Students are assigned a writing topic, often based on their own zoo animals. The program tells them to write a minimum number of words and directs them to incorporate specific requirements such as a comma, an exclamation point, a transition word, an adjective, or even a specific word, such as exciting. (Requirements are more demanding for older students.) Students can choose to either write on their own or receive helpful prompts that use leading questions to walk them through an assignment. In the guided writing process, students write each response in a sentence, then these sentences are grouped together into a paragraph. Some of the sentences are even started for them. Students can easily edit the paragraph. The entire process is very simple and encouraging. However, with the automated paragraph construction feature, there are sometimes grammatical errors that students will need to correct. Parents can also create their own writing assignments that are sent to the child through the program. (They get awards for those assignments too!)

The program assesses the student's writing only according to the specified requirements. However, Night Zookeeper tutors (real people) give students personalized feedback on their writing through the message area of the program. Rather than detailed editing feedback, this is likely to be one suggestion of something that might be changed or added. If students choose to go back and re-edit their writing in response to suggestions from tutors, they can earn extra rewards.

The writing instruction is not designed to teach careful and correct paragraph construction with a topic sentence and supporting details. Rather, the point seems to be to encourage students to write and to employ variety in their sentence structure and vocabulary.

Twice a week, students are directed to watch instructional lessons under the heading “TV+.” These short, animated lessons are much more entertaining than you might expect. The lessons are made available to students in a particular order, but they teach concepts selectively and do not try to cover all grade-level skills. Using them out of order might not matter very much. Students might learn about punctuation in one lesson, poetry in the next, and then adverbs. Each lesson is followed by an interactive set of questions and a writing activity, and students earn orbs for completing them.

The instructional lessons and writing assignments are only two of the many elements of the program. Students can also choose from among a number of activities and games. Grammar, spelling, and keyboarding are all presented in game-type formats. For example, in one game words scroll down the screen while students try to type them before they disappear at the bottom. These are vocabulary words that students might use in storytelling—words such as wandering and excitedly. The goals for this activity seem to be to familiarize students with a broader vocabulary and increase their typing speed.

Interacting with Other Students

Students can interact with other students who are using the program if parents want to allow it, although there is no live chat. There are group games on language-arts skills that students can play with random students or their own class members or friends, and there are optional writing competitions. Students' drawings, stories, and project ideas can be visible to all program users, or you can restrict their visibility to specific friends, a class group, or no one. If you wish, students can share and comment on their own and their friends’ writing projects. All content is moderated to keep the program safe for students, and no student comments are visible until they have been approved by a moderator.

The Parent Dashboard lets parents choose assignments for their child if they wish, track student progress, view messages left by the tutors, adjust the difficulty of games, change the age of the student (changing the level of difficulty), and leave comments on their writing. This is also where you can change the privacy settings so that your child’s work is not shared publicly.

The language in the program reflects its U.K. origins as is evident in its use of words like blimey and mate as well as the slightly noticeable accents of the voice-overs. There might occasionally be an unfamiliar word for those from other English-speaking countries, but the culture and accents are not a significant issue. There is an option to choose a different country when you sign up, and that should make the language issue insignificant.

I spotted occasional things that one might consider grammatical errors or omissions in the program, although this is a minor issue. For instance, in one game students have to grab words as they scroll down the screen and organize all of them into a correct sentence. When the sentences include dialogue, they don’t include commas to set off dialogue as is needed in a sentence such as “I am too tired,” said the boy. The comma isn't required in all countries, but in the U.S., it is. There are occasional rough points in the program that should be reworded, such as the instruction for one writing assignment to, “Use the word ‘in a word’ towards the end of your report.”

An online parent guide explains how the program works in general terms. Sometimes students will have to figure out for themselves where to go next and how to accomplish each activity. Usually it’s obvious, but occasionally I was stumped about what was expected. There is no help button or explanation available if a student doesn’t know what to do. Also, there is no set pathway through the program. Students can spend more time on their favorite activities if they wish. This might be fine, but parents might sometimes need to direct students to complete certain activities.

The vocabulary and spelling words that appeared in the program that I had set up for use as an eight-year-old often seemed more difficult than I would have expected. I don’t know if my speedy typing influenced the program in that direction or maybe some other adaptive element was at work. Nevertheless, spelling words like mysterious and courageous seemed above grade level.

I expect that most students will love playing around with the Night Zookeeper to practice language-arts skills. The format is so much more interesting than traditional resources! A seven-day, free trial allows you to try before subscribing.