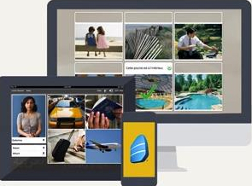 Rosetta Stone Homeschool is a series of foreign language programs that helps the student understand spoken words as well as written ones. While this is primarily a conversational approach, there is also some grammar instruction. Lessons are presented online and can be accessed with a computer, tablet, or smartphone. You can also download lessons for use when you don't have an internet connection.

These are self-teaching programs, so parents need not know the language their child will study. Rosetta Stone’s programs include components for the student to speak and type into the computer, tablet, or smartphone. The speech recognition feature of the program requires the use of a headset with a microphone.

Rosetta Stone uses essentially the same extremely interactive methodology for every language. For example in early lessons, you first look at four photos and listen to words by native speakers that are illustrated by the photos. Listen to the sequence over and over or choose a particular photo and hear the words as many times as you wish. Many lessons show the words on the screen as they are spoken. Later lessons frequently reuse the same photos, possibly asking the student to repeat a sentence describe a picture, make the correct response, or choose from a few options the correct word or response. The photos are multicultural to be appealing to various nationalities.

Parents can set up the program to follow a set lesson progression. There are eight choices ranging from the “Full Year” program for students working toward high school credits down to “Speaking & Listening Focus.” Younger learners or those who don’t need to read or write the language for some other reason might choose the latter. In between are choices that are more streamlined than the Full Year. One lesson path includes reading but no writing. Another path focuses on both reading and writing for the person already familiar with the spoken language. “Speaking” can be turned on or off, even in the Full Year lesson path.

Those who prefer can skip around the lessons as they please rather than follow a programmed lesson progression. This might be very helpful to those tackling an unfamiliar language who want much more repetition of a certain type of exercise. Students can repeat a lesson as often as they like.

Rosetta Stone Homeschool has a record-keeping and reporting system where parents can both manage and track each student’s progress. Tests at the end of each lesson show the number of answers correct and incorrect as well as a percentage score. Parents can access reports showing where the student is within a particular activity, which activities have been completed as well as when they were completed, time spent to complete each activity, scores for activities, plus an overall progress report. Reports are printable for those who need to maintain or turn in academic documentation.

Because of the flexibility of the Rosetta Stone programs, the same program might be used with learners from about third grade through adult levels.

Rosetta Stone has a free demo so you can get a good idea of what it looks like before you buy. They also have a 30-day, money-back guarantee if you are not satisfied. You can subscribe for 6, 12, or 24 months, and there is a family pack option (for up to three students) with the 24-month subscription.

While the conversational approach used by Rosetta Stone won't work for all students, it has been used successfully by many and remains one of the easiest to use foreign language options for homeschoolers.

You might want to check out the ready-made lesson plans from Homeschool Planet that are available for Rosetta Stone courses.

If you are not already a member of the Club, enter CATHY as the Referral Code on the sign-up form and get 500 FREE SmartPoints.