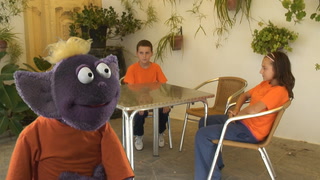 Speekee® offers two different online Spanish courses. FastTrack is for ages four through seven, and Accelerate is for ages eight and up. When you subscribe you get access to both courses as well as additional material under Speekee® TV and Speekee® Play. In this review, I focus on FastTrack and Accelerate, two structured programs with 40 weeks of lesson material each.

You can have lesson plans emailed to you once per week, but you can also view lesson plans online and move at a faster pace. However, the email option makes things very simple. Just open the email and your lesson plan with links is there ready to go without having to navigate to the website and login.

Courses teach listening, speaking, reading, and writing skills, but there is definitely less writing in FastTrack than in Accelerate. If you are using FastTrack with a four-year-old, you might skip the writing altogether if need be.

Lesson plans and activities are very easy to access and use. Navigation is a breeze.

For both courses there are four learning activities each week. Click on the box for one of the activities and it opens up a brief lesson plan. These are written to parents or teachers with the intent that lessons be an interactive experience rather than independent learning. Lessons involve activities such as watching videos, singing songs, completing worksheets, drawing, practicing Spanish orally, looking up words in a dictionary, playing games, and other interactive activities. However, there are usually only one or two activities to be completed each day. Most sessions should not take a great deal of time.

However, some activities will require more prep time. For example, you will need to have on hand materials to make sock puppets during the first week of FastTrack. In Accelerate, the lesson plan for week 38 activity 4 tells you to “cut up ten sentences (see download) and put them into an envelope. Your child completes and writes out the sentences. Part two: you have pre prepared a 'magic box' with one item represented in each of the sentences. Can your child match the items taken out of the box with the correct sentences?” While most lessons don’t require this much preparation, some do.

Lessons use video segments as the primary teaching element but not for every lesson. With the videos, you can choose whether or not to display subtitles in either English or Spanish or not at all. If you don’t already know Spanish, you might want to start with English subtitles to make certain you grasp the meaning, then rewatch with Spanish subtitles to see what the Spanish words look like.

Videos are entirely in Spanish, an immersion approach. That means children are exposed to a great deal of vocabulary in every video. However, they are not expected to master all of it.

Some worksheets are included from time to time. These are printable PDF pages linked at the bottom of each lesson. Occasionally, a reproducible page is used as part of an activity rather than as a worksheet. The number of worksheets and level of difficulty is higher in Accelerate than in FastTrack.

Lots of review is built into the lesson segments and activities, but these courses are likely to be most effective if parents practice vocabulary with their children in a playful manner as much as possible outside the lesson activities.

You can tell that a great deal of work went into the creation of the videos for these courses, but they still are amateurish. Many children and a few adults participate in the videos, and while they do a fine job, they don’t appear to be trained actors. The Spanish presented in Speekee occasionally reflects usage in Spain rather than Mexico and Latin America. For example, un bolí is used for pen rather than una pluma. However, such differences are minor enough that they need not be of concern.

Even if these aren’t the most polished courses, I like the approach and expect that children up through about fifth grade will as well.

Courses don’t track individual students, so you should be able to use one subscription for the family for the courses. However, Speekee Play does track individual students and requires separate subscriptions if more than one child will be using it. It seems like Speekee Play is most appropriate after a child has completed Accelerate, so you can wait on this option. You can try Speekee for free for two weeks before subscribing.

In the FastTrack course for ages four through seven, videos use a combination of live actors and puppets who interact, talk, and sing. Speekee is a larger Sesame Street style puppet while Lupi and Dino are sock puppets.

The immersion approach used with this course exposes children to a great deal of Spanish, but it selects only a few words or phrases for children to learn in a single activity. For example, the very first segment has children introducing themselves, practicing greetings, counting, identifying colors, saying phrases such as muy bien, and talking about playing at the park. However, the only phrase students are told to write and illustrate is el parque (the park). Watching the video, writing, and drawing el parque comprise the entire lesson.

This first video runs 13:50 minutes which might be too long for young children since there is so much unfamiliar vocabulary. However, this same video is used in segments and in its entirety a number of times through the first four weeks. Students will gradually become familiar with more and more of the vocabulary. A new video segment is introduced every four weeks and is used in the same fashion throughout each four-week block of lessons.

The second activity of week 1 suggests that children make their own sock puppets for Lupi and Dino. It suggests that the parent or teacher use praise words such as fantástico and muy bien that were introduced in the first video. Children are not expected to know the vocabulary at this point, but they might repeat these words.

The third activity directs you to have children draw happy and sad faces on paper using green, yellow, and red—the colors introduced in the first video. Children will then hold up the appropriate face when you say to the child either muy bien or no muy bien. You can add practice with the phrase ¿Y tu? as well. Then you can encourage your child to say these phrases as well.

The last activity for the first week uses a song to practice Hola, ¿Qué tal?, Soy, and Me llamo. The puppets Dino and Lupi introduce the song in a short video. Children should then try to sing along with the song.

Activities for each week vary but with this same type of mix of video, songs, hands-on work, and oral practice. Themes for the videos and blocks of lessons are topics such as the park, the café, the house, the zoo, the class, the store, the station, and the beach. Along the way, children learn vocabulary that includes colors, counting, family members, clothing, food, animals, telling time, and much more. 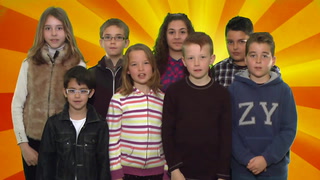 Since Accelerate targets children ages eight and older, the videos primarily feature children as actors and there are no puppets. As you would expect, lessons are more challenging in Accelerate. A new film segment is introduced every two weeks rather than every four weeks, so the pace is speeded up from FastTrack. A review is presented for the final activity of teach two-week unit.

More vocabulary is introduced and children are expected to master more of it. There are more worksheets than for FastTrack, and students will have to do more writing on those worksheets. For example, in week 5 activity 4, the worksheet has pictures of four animals. They are to write the names of these animals without prompts then draw and name two more animals. They will write complete sentences in many worksheets. There’s even a page for week 6 activity 3 with math problems in both words and numbers presented like this:

Even with the increased writing, the amount of writing required is quite low.

Accelerate teaches quite a bit of vocabulary, but it continues to do so in a conversational, immersion style. There are occasional grammatical explanations within the lesson plans, but this is not a grammar-based course.

Older children can start with the Accelerate course. It teaches the same vocabulary as does FastTrack but more quickly. It also incorporates the vocabulary into complete sentences so that children can begin to carry on rudimentary conversations in Spanish.

Note that one very brief video segment for week 30 activity 3 has children playing at fortune telling. (A number of lessons in this section are presented in the context of a carnival.) Another video for week 38 activity 4 shows a young girl sitting yoga style and “concentrating.” While concentrating, she makes herself rise up and down and move different directions while floating in the air. These might be minor issues for some families, so just be aware that the worldview represented in these courses is secular.