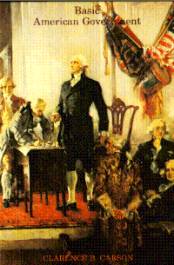 Clarence Carson, known to many home educators for his American History series, has tackled American Government, a subject inevitably made dull by most textbooks. Carson brings life to his subject by putting it in context, dealing with the people and ideas that formed our government rather than treating us to lists of lifeless facts. Carson tackles topics others shy away from. I was particularly pleased to see that he deals with the definition of our form of government as a republic rather than a democracy. He credits the Judeo-Christian view of man as the reason for that choice by our founding fathers.

Carson frequently addresses the expansion of federal power at the expense of states' rights. One such instance is in relation to the 17th amendment, which provided for direct election of senators. He shows how this was a dramatic shift from the selection of senators by state legislatures, which moved our country away from the intended form of republicanism and toward democracy.

The entire book is 592 pages in length, but the actual text is only 480 pages. A glossary, notes, documents, and an index comprise the rest. Still, this is a hefty book for some high schoolers—slow going at times, but for the most part, very interesting reading.

The arrangement makes it possible to use the book in sections. You might do the introduction, then use the second section in conjunction with world history studies. The last two sections could be studied in conjunction with U.S. History. Thus, reading the book could be spread out over a couple of years. There are no questions or quizzes with the book, but I suggest that parents and teens read the book together and discuss it. Carson makes little attempt to hide his opinions, and the book is all the more interesting for it. This is one of the books I would put on the "must read" list.