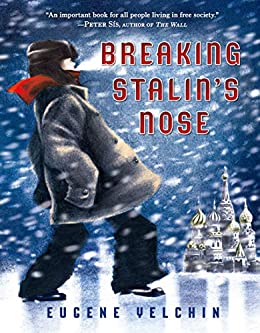 Breaking Stalin's Nose is a historical novel about a ten-year-old boy named Sasha Zaichik who is growing up in Stalin's Russia. The author, Eugene Velchin, grew up in the Soviet Union during its declining years in the late twentieth century, so he writes from both personal experience and historical facts.

Sasha's father works at the Lubyanka, the notorious Soviet prison, and is a political enforcer for Stalin. Sasha worships Stalin, and he considers his father a hero who serves his country. Sasha's living situation seems unbelievable to us. "Forty-eight hardworking, honest Soviet citizens share the kitchen and single small toilet in our communal apartment we call komunalka for short" (p. 5). Sasha's enjoyment of a carrot as a rare treat will startle most children. But Sasha thinks he's fortunate and life is wonderful since this is all he knows.

The story portrays his disillusionment and change of perspective that takes place over the span of just a few days. Sasha is excitedly anticipating his initiation into the Pioneers the next day. This is the children's organization in support of Stalin, akin to the Hitler Youth. At the induction ceremony, Sasha's father is to represent the government, tying on the Pioneers' signature red scarf for Sasha and each of his fellow initiates. The book conveys the important meaning attached to the scarf and the initiation.

Velchin does a fantastic job of building up to Sasha's full disillusionment. People seem to have disappeared without notice. Schoolmates are relegated to the back row if there have been accusations against their parents or their parents have disappeared. The children are pressured to react in common against perceived threats. So a Jewish boy is bullied, and Sasha is coerced into throwing a snowball at him that breaks his glasses.

Two disastrous things happen. First, Sasha's father is arrested the night before the initiation. Neighbors within their communal home immediately oust Sasha, so he becomes homeless. At school, he tries to continue on, believing that Stalin will set things straight in regard to his father. Secondly, Sasha has been selected to carry the banner for the procession that begins the initiation ceremony. He collects the banner, but as he is imagining the great glory of leading the procession, he accidentally knocks the nose off a bust of Stalin with the tip of the banner. No one is there to witness his crime, and it sets off a chain reaction of accusations, investigations, and arrests.

I won't give away the rest of the story, but it's a powerful picture of how communist countries (and other tyrannies) function. That makes this a very timely book. With so many people advocating for socialism in the United States and other countries, it seems very important that they understand how socialism so easily leads to a tyranny of the collective as we see in communist countries. Stalin might be gone, but Russia remains a country where people easily disappear. Communist China and North Korea follow very much in the footsteps of Stalin with the present-day murder of millions, forced "re-education," and the same type of propaganda that puts the state above all else.

The book is great for reading aloud, and it won't take very long. In addition, Velchin's grim, black-and-white illustrations help children visualize the story. I would recommend reading it aloud with children ages ten and up. Even though it's an easy book, teens and adults can and should read it too. The message is one everyone needs to understand.

I created the following discussion questions to be used with the book.

How does Sasha change from the beginning of the story to the end? (His eyes are opened, and he begins to understand the evils of the communist system.)

How would you compare Sasha’s life to yours?

Why do you think everyone lived in one big shared apartment building with just one kitchen and bathroom?

What about Sasha’s father, Mr. Zaichik? Do you think he’s a good man or not? (He worked as a Stalinist enforcer, but he ends up arrested and killed. Maybe he served out of a perceived necessity. Maybe he wanted power. What do you think happened to most people who went to the Lubyanka?)

What do we find out about Mr. Zaichik and his wife later on? (He had reported on his wife. See p. 159.) Why do you think he did that? Does that change the way you think about him?

Why was the Young Pioneer scarf so important and exciting to Sasha? (The scarf is symbolic: it makes a patriotic statement, it identifies members of those who belong to the approved group, and it serves as a rite of passage.)

What did you think of the Stukachov family? (They are a large family who needed more space, but they were envious and devious.)

On page 32, what does Sasha mean when he says that he and his dad oppose personal property on principle and that it will disappear when Communism comes? (Rejecting the private ownership of property is a key element of communism. Communism always promises a utopian future that never arrives. Socialism does the same and is often considered a stepping stone towards the communist utopia.)

On page 26, Mr. Zaichik tells Sasha, “It’s more important to join the Pioneers than to have a father.” Is that true? (To those who value the state more than the individual, this might be true.)

Read chapter 12 aloud. What was different about Borka Finkelstein? Why do they gang up on him? (He's Jewish, wears glasses, his parents had been arrested, and he had no protection. He was an easy target.)

Why does Vovka push Sasha to throw a snowball at Borka? (Peer pressure. Maybe Vovka wanted to pick on someone else to avoid getting picked on himself.)
Have you ever seen kids do this? (Adults do this too. For example, rioters sometimes urge people to gang up on police officers and hurt them.)
What’s going on with Vovka Sobakin? (His parents have been arrested, so he’s now suspect himself).
Do you think that had anything to do with the way he treated Borka? (Maybe he was trying to prove his loyalty to the state--that he’s not THE outsider.)

Why does Vovka attack their teacher when she accuses him of being an enemy of the state? (Because he knows he’s not the one who broke Stalin’s nose, and maybe because of pent-up anger.)

Why do you think Vovka put Stalin’s nose in the teacher’s desk? (To hurt her.)

What do you think of the teacher Nina Petrovna and the way she treats the class? (She uses peer pressure to get them to do what she wants and to think the way she wants them to think. She’s unfair and unkind. Parents, you might want to discuss what happens to her in the end. She gets hauled off and blamed for something she didn’t do, but children will likely cheer her comeuppance. However, what attitude should they have?)
Why do you think Nina Petrovna acted as she did with the class? (She might have been a true communist loyalist and believed she was doing the right thing for her country, but she also might have acted out of fear for her job and her own future.)

Why do you think the principal calls the person who broke Stalin’s nose a terrorist? Why exaggerate? (p.87) (This will help make people angry about it, and then maybe they will help catch the person. It also reinforces Stalin's importance. The principal might also have feared getting in trouble if he didn't take a strong stand.)

Why do you think Borka Finkelstein says he did it? (He wants to see his parents in prison.)

Should Sasha have admitted his own guilt to keep Borka from being arrested?

How does Sergei Ivanovich end up with the letter Sasha wrote to Stalin? (He found it in Sasha’s dad’s briefcase.) Why does he think Sasha will spy for him? (He thinks Sasha is still a dedicated Communist because of what he wrote in his letter.)

Why does Sasha run away? (He doesn’t want to go to an orphanage.)

Why do people wait days in the long line to get into Lubyanka prison? (Hope that they can see their loved ones. They are used to waiting in long lines for things, so the line for prison visits is not unusual to them.)

Do you think it’s a good idea to have children, parents, and friends report on each other to the authorities? (What do you think of the See Something Say Something program from our Department of Homeland Security? Have you heard of it? https://www.dhs.gov/see-something-say-something) (Read p. 161.) Do you see anything else happening in our country that looks like what happened under Communism?

Parents: Consider expanding to a discussion of modern China. The Wall Street Journal ran an excellent article and photo that explain and show how Xi Jinping is following in Stalin’s footsteps. This article especially focuses on the indoctrination of the young. The photo shows children in uniforms all wearing the exact same red scarves as the Pioneers. (The photo and beginning of the article are viewable without a subscription.) https://www.wsj.com/articles/xi-china-campaign-youth-patriotism-propaganda-11609343255?page=1