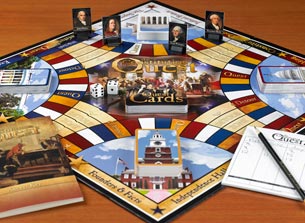 The Constitution Quest game first caught my eye when it was on display at a homeschool conference. The handsome box and game board grabbed my attention as well as that of many other shoppers. I was very pleased to discover that the game’s playability matched its looks.

While the game is designed primarily for teens and adults, anyone who has read the U.S. Constitution (paying attention to detail) should be able to play. It’s a trivia game in one sense, since it poses multiple-choice questions regarding details of the Constitution. The game becomes more fun when players draw Quest Cards with True/False questions, land on the same square as an opponent (possibly sending them back 5 spaces), double their score by correctly answering “We the People” questions, have to take a detour, and draw Wild Cards.

The game includes a full-size game board, five card decks, playing pieces and dice, score pad, directions, and answer key. Both the directions and the answer key are compact, laminated folders that are very easy to use. We loved it when we opened the game and discovered it would take just a few minutes to figure out how to play! Directions are short and simple.

The game can generally played in less than one hour. However, you could always extend the game by having players make two passes around the board. You should have plenty of game cards to do so without repeating questions. Players may also pair up and act as teams rather than individuals. You could even work with teams of more than two players if you wanted to, although that’s not in the instructions.

A separate instruction sheet includes suggestions for players as young as ages 7 to 10. "Novice" cards in each deck are marked with a star to indicate that these are the easiest questions. Separating those cards and putting them on the top of the deck makes it likely that younger players will be able to answer some questions correctly.

Players will certainly become much more familiar with the U.S. Constitution by playing this game. While that makes it a fabulous tool to use in conjunction with a Government course, it is still enjoyable for play outside of a course. I played with adults one evening just for fun. All agreed that it was a great game. Some might be reluctant to play since it’s been years since they’ve read the Constitution. However, the chance elements built into the game dilute the natural advantage some players might have with prior knowledge. In fact, our first game was won by the person who probably was rustiest on her Constitutional knowledge!