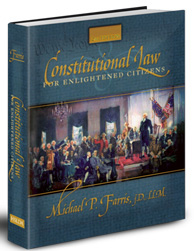 The title of Constitutional Law for Enlightened Citizens makes it sound like the book is directed toward a very elite audience of “enlightened citizens.” However, Michael Farris explains in his introduction that the term is derived from a comment by George Nicholas, a hero of the Revolutionary War: “An enlightened people will never suffer what was established for their security to be perverted to an act of tyranny” (p.3).

Farris concludes that, “George Nicholas’s optimism has not been fulfilled. The Constitution was intended for our liberty….Instead, the [Supreme] Court has twisted the Constitution and made it an instrument of tyranny” (p.4). But Farris also says that the blame for this needs to be placed on citizens rather than the Court.

Farris’s intent in this book is to advocate for an “original intent” approach to interpreting the Constitution as well as to help his readers grasp how the Supreme Court as well as other courts in the United States have made pivotal decisions that have changed the fabric of society and our understanding of law and government. He hopes to awaken his readers to the problem of judicial tyranny and have them reclaim their responsibility. He believes that “enlightened citizens” can repair the damage done by using the political processes provided within our Constitution and that we can “return this nation to the intentions and spirit of our founding” (p.4).

Farris is one of the most well-qualified lawyers in the United States to write such a book. He has argued cases before the Supreme Court and written briefs for the Court on many issues. He has been at the forefront of many battles to secure parental rights as the founder of Home School Legal Defense Association and has similarly fought on behalf of Concerned Women for America and other’s defending religious freedom. In addition, he is Chancellor Emeritus of Patrick Henry College where he teaches constitutional and public international law.

The book can be read by older teens and adults as a stand-alone book. High school students can use the text and its companion Student Quizzes and Answer Key as part of their government coursework. However, because the scope of the book does not cover all that students should learn in a high school government course, it needs to be supplemented with another resource. HSLDA publishes a DVD/workbook course, Constitutional Literacy, which can be used for this purpose, or you might use something like Christian Liberty Press’s The Land of Fair Play.

The book has 41 chapters. The first seven chapters lay the groundwork for the rest of the book. The first chapter explains the “First Principle” of American government: “Only elected legislators should be allowed to make law” (p.5). Chapter two explains and advocates “original intent.” Chapter three is an historical overview of the U.S. Constitution. Chapters four and five explain the failure of the Articles of Confederation and address the legality of the adoption of the Constitution in their place. Chapter six, “Lessons from the Conventions,” highlights the key issues at stake in the ratification debates. Chapter seven contains the text of the U.S. Constitution and its amendments.

The remaining chapters—the bulk of the book—consists of the abridged texts of numerous Court cases, each preceded by a brief explanation of the case’s importance. Sometimes dissenting opinions are included after the text of the prevailing opinion issued by the court. Chapter 8, “How to Read Supreme Court Cases,” introduces this section. It includes Farris’s suggestion that the reader prepare his or her own brief summary of each decision by answering five questions:

“What are the facts?”
“What is the issue?”
“What is the holding [the court ruling]?”
“What was the reasoning of the Court in reaching its holding?”
“What is the general rule being announced by this decision?” (pp. 121-122).

The text explains each question fully. Students seeking course credit should answer these questions as part of their coursework. However, there are no answers for such an exercise in the Student Quizzes and Answer Key.

While the commentary is very readable, some of the justices' writing takes perseverance to unravel, so make sure your teen is able to work at this level if you use it as a textbook.

The text itself is a gorgeous, hardcover book. The attractive page layout makes it much easier to read than if it were printed more plainly.

Students who read through and analyze all of the court decisions in this book will likely end up with a better grasp of some of the most important principles in law and government than will those who only study our governmental systems in theory as is required in most government courses. While students do need to learn broader aspects of government (e.g., the differences between the Senate and Congress, the President’s role as Commander-in-Chief, and the President’s cabinet), what they learn in Constitutional Law for Enlightened Citizens might encourage them to become proactive citizens who can help return our government to its constitutional boundaries.

I would also strongly encourage adults to read the book for similar reasons. We should all be concerned about the immensely important social and political policies being determined by Supreme Court decisions rather than through the appropriate legislative processes.