Exploring the Constitution: A Study of America and Our Founding Documents 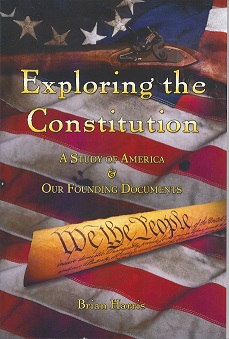 Exploring the Constitution is written primarily for adults, but homeschooling families might find it a very useful resource for government courses. It includes the text of the foundational documents along with commentary and articles on related topics.

It includes some history so that the reader understands the context within which our country was formed. Rather than a complete history of events leading to independence, it highlights particular events and conflicts such as the Navigation Acts, The Stamp Act of 1765, and the Intolerable Acts of 1774 along with American responses to them. The philosophy that influenced our Founding Fathers is summarized very briefly with references to Baron Charles Montesquieu, John Locke, Sir William Blackstone, and Thomas Paine.

The bulk of the book is devoted to study of the founding documents. The complete text of The Articles of Confederation, The Declaration of Independence, and the U.S. Constitution is included, each interspersed with commentary. Study of the Constitution is prefaced with information about the Constitutional Convention, the debate over “federal” or “national” plans of government, the Three-Fifths Compromise, and the concept of separation of powers. Here the author highlights the fact that the United States is frequently described inaccurately as a democracy while the accurate description is a republic.

The author clearly speaks from a “limited government” and Christian point of view. For example, commentary on the First Article of the Bill of Rights says, “This statement says what it means and means what it says. Congress has no authority to intervene, regulate, or impede religion and the ‘free exercise thereof’. The framers were building a republic where there would be no national church as there was in England” (p. 114).

Commentary on the 18th Amendment (Prohibition) reads: “As one reads through the Constitution it will be observed that the document identifies what government can and can’t do; not what people can and can’t do. This amendment eroded the founders belief in the principle of self-government and went outside the original intent of the Constitution in an attempt to regulate behavior, or shall we say, legislate morality” (p. 132).

Commentary such as this should be thought provoking, whether you agree or disagree. As interpretation of the Constitution has shifted further and further from the original intent of our Founding Fathers, these are issues that should be raised for discussion, and this book helps that happen.

A substantial Appendix includes copies of a number of related documents such as the Mayflower Compact, The Virginia Declaration of Rights, and George Washington’s Farewell Address. Two much more current documents—the text of a Congressional speech by Congressman Ron Paul and Section 1021 of the National Defense Authorization Act for Fiscal Year 2012—again reflect the author’s concern for a limited government that acts prudently.

Exploring the Constitution might be used on its own for reading and discussion, but I suspect in homeschooling situations, it is most likely to be used as a reference tool. I think it would be excellent to use alongside another resource that provides explanation of the Constitution, comparing and contrasting each author’s viewpoints. That other resource might even be a textbook on U.S. Government such as those from BJU Press and A Beka Book.

Exploring the Constitution A Study of America & Our Founding Documents