Foundation for Freedom: A Study of the United States Constitution 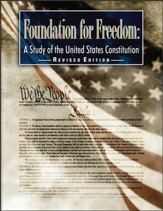 From time to time, lessons address current controversies and viewpoints that relate to the Constitution. For example, the section about impeachment discusses all presidential impeachments up through the second impeachment of President Donald Trump that occurred after he left office. In addition, the text often refers to particular Supreme Court decisions to highlight the increasingly powerful role the Supreme Court plays. Timelines included at the end of a few of the chapters can help students view events within their historical context.

The text includes the discussion of religious issues and their impact as you would expect in a book published by Christian Liberty Press. However, the presentation is objective rather than preachy, making it suitable for non-Christians as well as Christians.

The course has a definite conservative political perspective in that it supports adherence to the Constitution and its original intent. Conservative views are also evident in its support of a limited federal government, its treatment of the second amendment (the right of individuals to bear arms), and other such instances as well as in occasional articles such as one titled, “The Borking of the Supreme Court.” Nevertheless, it is often more objective than one might expect. For example, an article titled, “The Penumbra of the Bill of Rights” explains how the Supreme Court expanded the idea of the “right of privacy” and used that to support the Roe v. Wade and the Planned Parenthood of Southeastern Pa. v. Casey decisions. It does so without additional commentary in favor of or against abortion or the court’s rationale.

As with most government courses that cover the Constitution, there are informational sections that don’t make for riveting reading. The explanations, history, background material, and commentary are the elements likely to be most interesting to students. While discussion is not required, it would almost certainly enhance sections of the course, especially those touching on controversial topics.

The text includes chapter review exercises at the end of each of its 15 chapters. In addition to an index, there are a number of helpful appendices: an outline of the Constitution, the entire text of the Constitution and the Bill of Rights, brief biographical information on our Founding Fathers, recommendations for further study, and a bibliography.

The teacher’s manual summarizes the content of each chapter, emphasizing key points. For some chapters, it adds Biblical Perspective notes that the teacher might present to students. Suggestions for “Additional Student Activities” in the teacher’s manual sometimes direct students to study the graphics in the text such as the timelines or a graphic explanation of the three branches of government. Other activities might be Internet research (using sites mentioned in notes at the end of a chapter) or reading from The Federalist Papers. Most parents and teachers will use the teacher’s manual primarily as an answer key for end-of-chapter review exercises, but the additional activities might be very helpful.

The quiz and test packet for the course has both a quiz and a test for either one or two chapters at a time as well as a final exam. Answer keys for these are at the back of the packet.

The softcover student text includes occasional illustrations, many of them in full color. At 320 pages, Foundation for Freedom provides comprehensive coverage of government at the federal level. Whether other topics need to be added depends upon whether or not your state has specific requirements as well as whether or not you want to dedicate some time to the study of state and local government. (I understand that Illinois has some specific requirements that include service learning, and simulations of the democratic process.) Clearly, it takes extra effort to add these components, but Foundation for Freedom should serve well for the bulk of a government course if not the complete course.

Foundation for Freedom: A Study of the United States Constitution--Workbook, Revised Edition