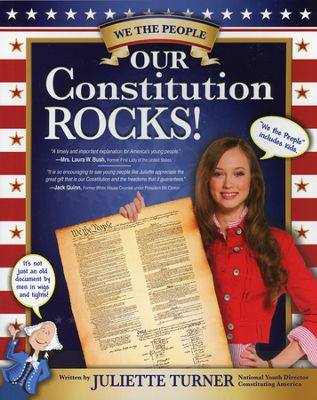 Our Constitution Rocks! looks like it might be for students in the elementary grades, judging by its cover. But this 224-page book is probably best for students in grades 6 through 12. It can certainly be used as the core of a semester-long high school government course. As the title indicates, the book covers the U.S. Constitution, including the Bill of Rights. The text of the Constitution is presented bit by bit as the book works through each article and section.

Author Juliette Turner, was a teenager when she wrote this book (published in 2012), so she has created a book more likely to appeal to teens than most government textbooks. Reading through the book, you can easily figure out that Turner has to be very politically active to have written it, but this is proven by her role as National Youth Director for the organization Constituting America.

The book is colorful and makes good use of graphics and illustrations. Text material is broken up into bite-size bits with headings like, “The Bottom Line” (summarizing the main idea right at the beginning), “What Were They Thinking?” (historical rationale), “Breakin’ It Down” (expands on the main idea), “How Can I Make a Difference?” (things to do), and “What Has It Done For Me Lately?” (often brings up current events topics to illustrate applications or implications of the Constitution). Sidebars and graphic call-outs also present interesting bits of information.

The occasional “Debate” pages use cartoon-like figures with actual quotes from Founding Fathers to present arguments over hotly-contested items such as setting pay for legislators and the role of courts. Turner adds some explanatory comments when the wording might be confusing to students.

Our Constitution Rocks! goes beyond many texts with examples and brief stories of practical applications and current events such as the issue of habeas corpus in regard to suspected terrorist detainees at Guantanamo Bay. It also mentions some Supreme Court decisions that have to do with the meaning of the Constitution—all of which help to bring the Constitution to life.

Turner seems to have an “original intent” view of interpreting the Constitution, although it is rarely evident. However, it reveals itself in a remark on page 74: “Medicaid or Medicare are extremely helpful to many Americans, but our Founding Fathers actually did not intend for the government to spend taxpayer money to take care of ‘favored’ companies or individual; rather, Alexander Hamilton thought ‘General Welfare” consisted of things like building roads that benefited all Americans.” Even so, Turner avoids taking a pro-Republican or pro-Democrat stance. She uses examples that reveal what might be considered to be errors on both sides.

“How Can I Make a Difference?” sections call students to action in some way. Some suggest research projects, often supplying website URLs as sources for information. If students pursue these research suggestions, they will become familiar with some of the websites that are valuable to those who are politically active. (Note that the "Thomas" site is one of the most valuable, but the URL has changed to http://thomas.loc.gov/home/thomas.php.) Sometimes the “action” is something like, “Memorize the Preamble and its true meaning and then share it with your friends” (p. 21). Some of the “actions” are very practical and educationally worthwhile, while others like this last one will probably be skipped.

To use Our Constitution Rocks! as the mainstay of a course, you would need to have students complete many of the “How Can I Make a Difference?” activities, including writing essays or research papers on at least a few of the suggested topics . While there are no tests, a “Pop Quiz” at the end of the book might be used for accountability as well. The Pop Quiz questions are a mix of simple and complex questions. Some questions such as, “Why are the 9th and 10th Amendments more important today than when they were ratified?” deserve to be used for research with answers in the form of essays. A few of these questions could be used earlier in the course. Older students should be expected to complete deeper research and more thorough papers than younger students. For example, the “action” on page 115 says, “Choose one of your favorite presidents and learn more about him, like important legislation he vetoed or approved, and the name of his vice president.” Younger students might provide simple answers to such a question while older students could go into a discussion of controversies about legislation approved or vetoed. It is easy enough to make these adaptations, but parents need to do some planning in regard to activities. There is no answer key, so parents might need to do their own reading and research to check answers and evaluate papers. I would also suggest that older students use other resources to study the Amendments to the Constitution in greater depth since the book breezes through them quickly without raising some of the most significant current and past controversies arising from them.