Jake MacAulay and Michael Anthony Peroutka
Institute on the Constitution 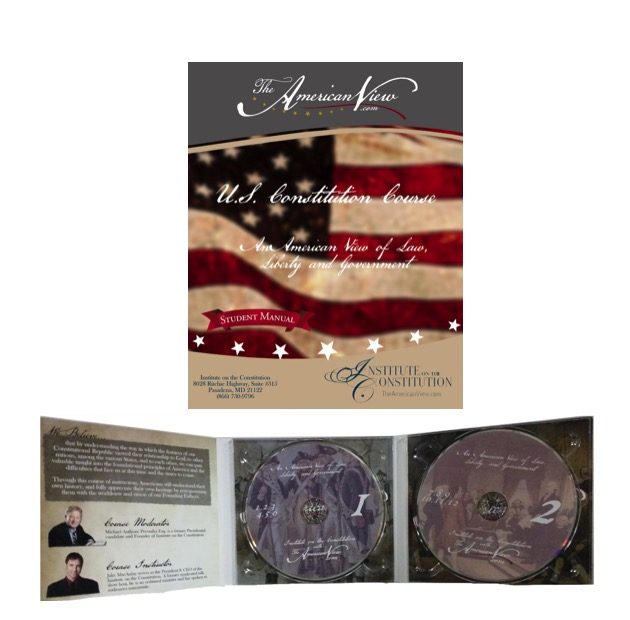 The U.S. Constitution Course: An American View of Law, Liberty and Government presents a view of government based on a biblical Christian worldview.

The course is presented through 12 video lectures by Jake MacAulay with introductions for each session by Michael Anthony Peroutka. While MacAulay’s lectures are the primary visual focus of the lectures, they are also illustrated occasionally with video clips and graphics. Videos are professionally produced with at least two camera angles. MacAulay lectures at a rapid-fire pace which makes the lectures move quickly but can sometimes be hard to keep up with.

Detailed outlines in the companion student manual cover all key points, although the outlines are not sufficient on their own.  The outlines should assist students with review, especially if they find the pace of the lectures hard to follow. Videos clearly show the transition of topics so students can easily follow along in their books.

The course teaches about the origins of our government and the political theory behind it, encouraging students to see the wisdom and prudence underlying the U.S. Constitution and the Bill of Rights. They strongly object to the transformation of our government from a constitutional republic as intended by our founders into the modern state that has assumed vast powers beyond those granted by the Constitution. While what could be considered Libertarian ideas about limited government show up frequently, the biblical orientation of this course is very much at odds with some present-day libertarian political positions on social and moral issues.

Reformed Protestant theology underlies the course, but it doesn’t limit its usefulness for other Christians. For example, Macaulay stresses belief in the priesthood of all believers and individual equality as major influences on the government of both church and state. He explains how ideas such as this undergirded Puritan political theory and were foundational to the subsequent development of the American form of government. This provides a background to understand the theological and political perspectives that influenced the Founding Fathers.

In the video lectures, Macaulay argues against the idea that even Jefferson and Franklin were Deists in their theological beliefs. His goal is to help students see that our Founding Fathers created our country based on a Christian worldview. His use of selective quotes supports his argument, although he doesn’t present any of the contrary evidence that others would present. He argues that even if they didn’t believe the basic doctrines of Christianity, they believed the basic values based upon Christianity.

Outline notes for each lecture are followed by a homework assignment. For most lectures these are assigned pages to read from The Law by Frederick Bastiat, the text of which is included at the back of the student book. The lesson for the first lecture includes an additional reading from the student manual, “How Tyranny Came to America” by Joseph Sobran. There are questions for students to answer that pertain to the Sobran article.

For all lectures there are a set of review questions and a set of test questions. Answers for both are at the back of the student manual. Because everything is contained within the DVDs and the student manual, students can easily work through the course independently.

The student manual has a plastic-spiral binding so that it lies flat as students write in it. It also has sturdy tabs that make it easy to find each lesson.

Each lesson includes optional suggestions for “Going Deeper.” These recommendations include reading material found on the publisher’s website, the Declaration of Independence and the U.S. Constitution (both included in the student manual) as well as supplemental videos by others such as Separation of Church and State: The Truth and The Lie by Michael A Peroutka, The Federal Land Grab by Pastor David Whitney, and Why No Church Should Be a 501c3 Organization, also by Pastor Whitney. Titles of these videos reflect the orientation of the course itself. These supplemental videos can be purchased at a very reasonable cost through the publisher’s website.

The level of the content is appropriate for teens and adults. The course might be used as part of a high-school level government course. It covers the articles of the Constitution, the Bill of Rights, and subsequent amendments in some depth. This is a substantial portion of what needs to be covered in a government course. State and local levels of government generally need to be addressed as well, so you’ll need to add that coverage to make a complete course. Even with added material, a student should be able to complete the course in one semester.

Clearly, the course will appeal to those who believe in a limited government and a biblical Christian worldview. Students are likely to encounter ideas they have not previously considered such as the fact that our form of government is actually a constitutional republic rather than a democracy. Because of thought-provoking information, I expect students will find it intriguing.