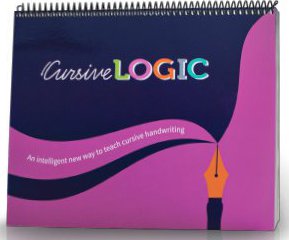 CursiveLogic simplifies the task of learning lower-case cursive forms by teaching all of the forms within four groups which author Linda Shrewsbury identifies with terms such as "ovals." These four categories identify the beginning strokes of the letters. For example, the ovals group includes the letters a, c, d, g, q, and o. Students first practice the initial stroke then they practice the second stroke and completion for each of these letters. Next, they join all of the strokes to form a continuous chain of letters. By teaching groups of letters together, CursiveLogic simplifies the challenge of learning cursive by having common forms reinforce one another. Children no longer need to learn letters individually. (The program assumes that students have already learned how to print all of the letters, and it builds on that foundational knowledge.)

Students ages nine and above can probably learn each group of letters in as little as one hour-long session. Younger students can tackle the lessons in smaller segments, probably spending up to one or two weeks on each group.

Each group’s lessons include instruction on how to join letters that end at the midline rather than the bottom line. When you teach the second group of letters, some practice exercises use real words made of letters from both the first and second groups. Similarly, groups three and four teach their groups of letters then incorporate words with letters from the previous groups.

Lessons often include tracing exercises, and many of the words to be traced are printed with double-lines (like outlines) that will be filled in as the student traces. (Most programs use dotted lines for students to trace.) Tracing exercises are generally followed by practice writing without the tracing forms.

Students will complete lessons directly in the book. Three laminated wipe-off pages are included at the back of the book for students who need repeated practice. Additional practice worksheets are available at no cost at the publisher’s website.

Each group of letters is color-coded to help students readily recall the initial strokes. Students might use colored pencils or pens that match the coding when they learn each string of letters. However, when they trace and write words that combine letters from different groups, they should not stop and switch writing instruments in the middle of a word to match the color coding. They need to use just one color since it is more important that they learn to write each word continuously at this stage.

Upper-case letters don’t fall into neat categories. Still, Shrewsbury divides them into six groups based on starting points and beginning strokes, although the sixth category, consisting of D, L, and Z, is labeled miscellaneous since these letters don’t conform to any of the other five groups. Even though upper-case letters are grouped, they are taught individually rather than in strings of connected letters. Lessons for each group emphasize common beginning strokes when applicable. After students have learned both lower and upper-case forms, they practice copying famous quotations.

A single book includes both teacher and student information. Shrewsbury includes a very helpful section at the beginning of the book, “Preparing for Cursive Handwriting,” with a discussion of grip, lined paper that should be used, body and hand placement, suggestions for left-handed students, and a beginning exercise. Thorough instructions follow in a section titled, “How to teach CursiveLogic.” Parents or teachers should read these sections in advance. The first lesson begins on page 13. Brief instructions are included with the lesson pages. Students need close supervision when they learn the forms for each group, although they can practice on their own after that.

Students can continue with Cursive Logic: Poems, Rhymes, and Songs which is labeled as a "Bridge to Cursive Level 2." After brief review of both lower- and upper-case letters, it continues with tracing and copywork practice. Cursive Logic: United States Presidents and Citizens is labeled as "Cursive Level 2." This book has minimal review, although it highlights practice with tricky mid-line connections. Students trace and copy the names of states and their capitals plus quotes from presidents or famous Americans. The content makes this book most suitable for students at least fourth grade and above.

I appreciate the efficiency of CursiveLogic. While it should be especially helpful for older students, this approach should work well for students of all ages.

The Art of Cursive 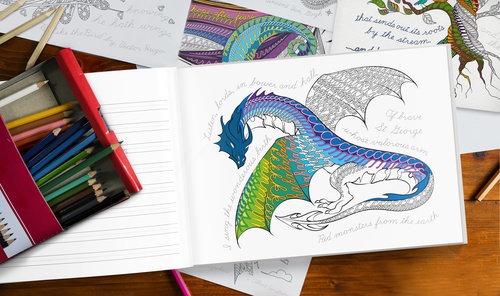 The Art of Cursive is billed as an adult coloring book, but it's so much more than that... and it's not just for adults. The beginning of the book briefly teaches the lower-case cursive forms within the same four groups used in the Cursive Logic books. Then it presents pages for tracing and copywork faced by delightfully whimsical coloring pages. However, these coloring pages aren't just for play. Instead, they have images created with lines of cursive letters or words that can be used for cursive practice. Lines curve and twist as needed within the images.

For children who love art, I recommend starting with Cursive Logic then shifting to The Art of Cursive for additional practice. They will need to use fine colored markers, colored pencils, gel pens, or something similar that gives them access to many colors with which to write.

The Art of Cursive seems like a great fit for those pursuing a Charlotte Mason approach to education because of that approach's appreciation of beauty and language incorporated with art.