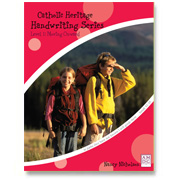 Nancy Nicholson has created a handwriting series that dovetails with Little Stories for Little Folks, a phonics and reading program that she created. The Catholic Heritage Writing Series might also be used by Catholic homeschoolers alongside just about any other program. Handwriting lessons in the early grades often reflect common phonetic elements that are introduced in phonics-based reading programs.

There are five books in the series for kindergarten through fourth grade. Levels K, 1, and 2 teach printing, while Levels 3 and 4 teach cursive.

The style of printing and cursive is traditional, but not completely identical to those most commonly encountered. Printed letters are simple ball-and-stick forms. Cursive letters are similar to Palmer Method, Zaner-Bloser, and others, but they have few “curls.” The uppercase cursive “F” and “Q” use less-common forms.

Direct instruction within the books is very limited. For example, joining cursive letters at the baseline is taught briefly, but joins at the midline are learned by copying examples. The books do provide instruction on starting points and the sequence of creating elements of letters, especially for printed forms. This should be sufficient for most students. Parents will likely need to work closely with kindergartners, but other students should be able to work independently through most of the lessons.

Books are designed with plastic spiral bindings at the top. This allows books to always lay flat when opened, and there is no side binding to get in the way of either right- or left-handed writers. Appropriately sized lines allow students to complete their handwriting work directly in their books. While the inside pages of the books are printed in black and white, they are nicely designed with fonts and graphic elements that add a little bit of visual interest.

Level K begins with a few pages of tracing activities then introduces both upper and lower case letterforms in the progression of the phonics program. Thus, the letters “m, a, t,” and “s” are taught first. Children trace dotted lines to form letters and words, then practice printing without tracing. In the second week, children are tracing short sentences. The amount of writing gradually increases so that children are copying short paragraphs in the final lessons. Level K has only 16 lessons to allow time to introduce the alphabet and work on other skills before attempting to teach handwriting.

Levels 1 through 4 each have 36 lessons for a full school year. Level 1 still includes dotted lines for tracing letters and words and, occasionally, for sentences. However, children will trace then write a lengthy sentence during the fourth week. During week 13 they copy a six-line poem. Level 1 incorporates a significant amount of religious vocabulary.

In Level 2 handwriting practice involves copying words, sentences, and paragraphs. Phonetic elements are largely replaced by religious vocabulary as students copy scripture verses, religious poetry, prayers, and religious statements, many reflecting the Catholic faith. Level 2 also supports preparation for First Communion, although that does not dominate the content to the point where you couldn't use it with children not preparing for their First Communion this year.

Level 3 teaches both upper and lower cursive forms, including some tracing activity to help children at the beginning. Children copy letters, words, sentences, and paragraphs to practice their cursive skills. A few riddles are intermixed with primarily religious content.

Level 4 is perfect for students attending Latin Mass or studying Latin since many copywork assignments are in Latin. Students do practice English words as well, but copying Latin prayers, parts of the Mass, Latin sayings, and songs offers a unique approach for mastering cursive.