Interesting Times: A Timeline of Centuries 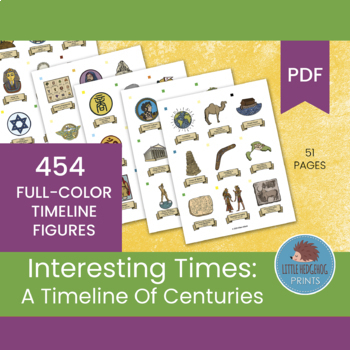 Interesting Times: A Timeline of Centuries is a downloadable bundle of files for creating a timeline that covers prehistory up through the present. The timeline works best in a book format, with pages inserted into a three-ring binder. A cover sheet for a binder is included. Nevertheless, you can also mount the pre-printed timeline pages on a wall or display them in some other fashion.

The timeline pages are designed to accommodate all of the figures in this set, and there will be space on most pages to add more. Most pages show a range of years, but an eventful year might have its own page. For instance, the year 2000 BC has its own page since this set has five figures to be entered for that year. But the preceding page covers the period of 2500 to 2001 BC since there are only three figures for that entire period.

You can order either a full-color set or a black-and-white set for students to color the figures themselves. The set of PDF files includes four sets of timeline figures that are arranged in historical order by time periods, with 454 figures in all. You can use as many of the figures as you want and add your own if you wish.

The artwork for the figures appears to have been created specifically for this set since all figures reflect a similar style of drawing. This makes the finished timelines look more aesthetically pleasing than timeline sets that use a variety of styles for their images.

The PDFs include a Scope and Sequence Chart that lists the figures in chronological order and show which ones correlate with Classical Conversations, Story of the World (Wise Bauer), and Veritas Press history. Overall, it looks like Interesting Times is the most comprehensive for Classical Conversations. For the period of 1500 to the present, it aligns most closely with The Story of the World. With all three programs, you will probably want to add a number of figures for modern history. You can certainly use this timeline set without using one of those three programs. A number of figures are included that are not featured in any of them—figures for artists, composers, and some events in modern history such as the eruption of Mt. St. Helens and the AIDS crisis.

The Scope and Sequence includes categories and color codes used by Interesting Times, such as pale blue for events, black for disasters, dark yellow for persons of influence, and red for war. You can use the color-coding system, but it’s not essential. One of the PDF files, a placement guide, shows all of the timeline pages with figures properly placed on them, although you don’t need to do it exactly that way.

Biblical history is fairly well represented with quite a few figures. Many major world religions have at least one figure. Events from around the world are included, and there are many figures related to United States History in the modern period. The selection of figures for the modern period is a bit surprising with a weighting towards a leftist perspective. For instance, the only U.S. Presidents from the 19th century to the present for which there are figures are Woodrow Wilson, Franklin D. Roosevelt, John F. Kennedy, and Barack Obama. The only Republican president that even gets a mention is the figure representing the resignation of President Richard Nixon. The final six figures in the set, the only figures covering the time period 2015 to the present, are one for the Paris Agreement to Fight Climate Change, two related to COVID 19, and three for young activists: Malala Yousafzai, Kelvin Doe, and Greta Thunberg.

The PDFs include files with dress-up items that you can use as you please. These include many different shaped banners on which students can write identifications for their own entries, small colored squares to be affixed next to the images if you follow the color-coding system, four types of blank scrolls and documents on which to write or draw information, and a variety of frames. All of these are intended to be used for adding your own figures. However, if you want to spend the extra time, you could enlarge or reduce the various images of figures and dress-up items to put an image within a frame or layer a figure onto a document page.

Printing the figures directly onto sticker paper is probably the fastest and neatest way to use them. It’s then simply a matter of cutting them out and putting them onto the pages. Of course, you can also copy onto plain paper and glue them onto your pages.

Interesting Times is one of the most affordable options for creating timelines since it is available in one complete package rather than as separate ones for different time periods. It might not have every figure you want, but it’s easy enough for students to draw or write in information for those you want to add.

Available through Etsy and Teacher s Pay Teachers for $19.99. Click on links below.