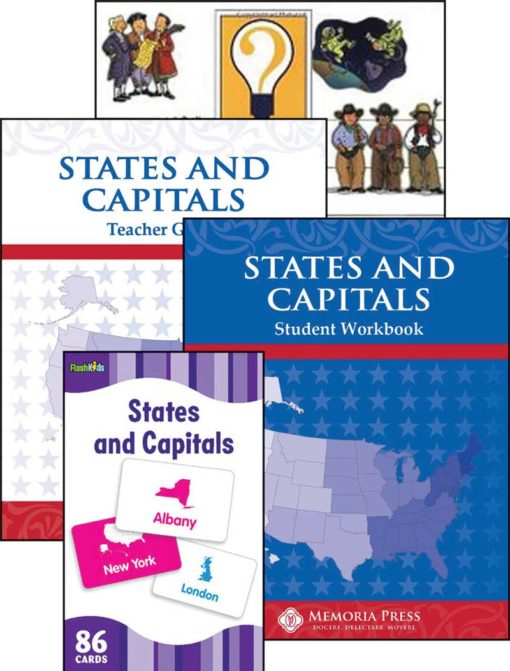 Memoria Press sells a set of three books as a course for studying the states and capital cities of the United States that they recommend for students in grades three through six.

The core text is a HarperCollins book, Don't Know Much About the 50 States by Kenneth C. Davis. This 64-page book is heavily illustrated in full color. Most states have one page, but New York, Texas, and California each have two. In each state's spread, a map of the state shows the location of the capital. Bulleted data points are given for each state: the capital, the state's nickname, the state flower, the state bird, and the year it became a state. The rest of the spread is more interesting since it uses questions and answers to present information about the state. For example, under Alaska, it asks, “What could you do with 425 Rhode Islands?” The answer: “Fit them inside Alaska!” (plus additional explanation that highlights the huge size of Alaska) (p. 9). Under Colorado, it asks, “What does the Continental Divide divide?” and “Why are Coloradans such good sports?” (p. 14). (The answer to the latter has to do with thinner air at high elevations as we find in the Rocky Mountains of Colorado.) As you can see, some of the information is important and some is trivial; and it certainly doesn't convey very much information about each state. However, this book was written for a young audience—probably about ages six through nine, and it is intended as only an introduction to states and capitals.

Memoria Press incorporates this book into their course by adding their own publications, States & Capitals Student Study Guide and States & Capitals Teacher Guide. The student study guide is a workbook that has a page for each state with a map of the state with light lines to show the edges of connecting states. Students fill in the names of neighboring states. There is also a smaller, unlabeled U.S. map on the same page showing the location of the state—this helps students more easily identify surrounding states. At the top of each page are lines for students to fill in the state's postal abbreviation, the name of the capital, and the state's nickname. These lines are followed by a few blanks lines for students to write in some “fun facts” that they have learned about the state. Don't Know Much About the 50 States serves as the source of information for completing the workbook. Students also learn to identify the states on a map of the U.S. The workbook includes some review pages that have students recall information on groups of states by regions. The teacher guide has student pages with overprinted answers plus tests.

Because of the young level of Don't Know Much About the 50 States, I would recommend this course for students up to only fourth or fifth grade. However, you could have older students use other sources than Don't Know Much… along with the Memoria press student study guide, researching the information for themselves. Using the course with Don't Know Much… should take very little time. Probably, assisting younger students as they write their “fun facts” will be the most time consuming. 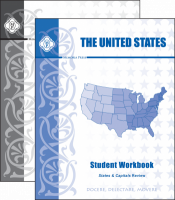 To help students retain what they have learned about the U.S., Memoria Press has published The United States: States & Capitals Review that you might use a year or two after you have completed the States & Capitals course. This slim, 25-page workbook uses various worksheet formats for reviewing states and capitals by regions. Students who haven't learned this information previously can use still use this review book to learn the material. (However, it doesn't include any other information about the states as does States & Capitals.)

The 95-page teacher key for The United States: States & Capitals Review has student pages with overprinted answers for all of the pages in the student workbook. It also has weekly quizzes, tests on each region, a final exam, and answer keys for all quizzes and exams.

The United States: States & Capitals Review is very simple to use and will take just a few minutes each week. It can also serve as a reinforcement or review for other resources you might have used to teach the states and capitals. Memoria Press recommends using it along with their Geography I course (World Geography). You can purchase course components individually or as part of a bundle for Geography I.

Don't Know Much About the 50 States