A Basic History of the United States 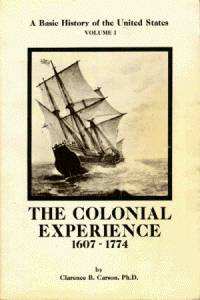 This series of six books is written at the college and adult level, so it is appropriate for very mature students and might be most useful as a reference tool. Carson presents a conservative view of United States history from 1607 to the present. The role of religion in history is discussed yet this is not an obviously Christian series until you reach the sixth book.

Carson writes in a more entertaining literary style than is generally found in history texts. He also includes much background information to enhance understanding of events. This really is more comprehensive and accurate (from my point of view) history than you will find in other textbooks.

The sixth book, written after the other five to bring the series up to the present, is especially interesting since it is less objective than the others. Carson introduces worldview conflicts in the second chapter, "The Philosophic and Religious Divide." The viewpoint is clearly conservative, constitutional, and Christian as he continues with chapters such as "The Debacle of the Welfare State," "Conservatives and Liberals...," "The Collapse of Communism," and "Political Gridlock III-Clinton's Tailspin."

A teacher's guide contains summaries, points to emphasize, discussion questions, lists of people and terms to identify, and activity suggestions that can be used at the teacher's discretion.

Please consider ordering directly from the publisher using our affiliate link to help support this website.

A BASIC HISTORY OF THE UNITED STATES (A TEACHER'S GUIDE)