This is one of my Top Picks
Earl Schenck Miers, illustrated by James Daugherty
Beautiful Feet Books 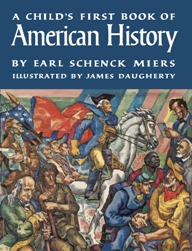 Beautiful Feet Books has published a new edition of A Child’s First Book of American History by Earl Schenck Miers that should have very broad appeal in the homeschool market. Children from about ages seven to twelve should enjoy the author’s lively, storytelling approach to history. The book also features more than 200 action-packed, colorful images by well-known illustrator James Daugherty.

Rather than a history text, Miers has written a chronological collection of 50 stories that highlight some of the most important events and people in the history of the United States. These include historical events you would expect such as the voyage of the Mayflower and the Boston Tea Party as well as a few cultural events such as the first game of intercollegiate football in 1869 and life on a cattle drive. Children also learn about scientific discoveries such as electricity and the invention of the radio.

Throughout the book, the author conveys a sense of the “American spirit” of pride, adventurousness, and determination as well as patriotism. While it is not an overtly Christian book, it discusses religious events positively. For example, it tells the story of the missionaries Father Jacques Marquette and Louis Joliet in a positive vein, and it mentions President Abraham Lincoln drawing spiritual strength from prayer. Miers is aware of his young audience, so stories are presented appropriately for them. For example, the story of the Donner Party does not mention cannibalism.

The book does not try to cover all historical events. If children ages ten and above are reading it, you will almost certainly want to supplement with additional material, especially material on modern history, since this book ends at the conclusion of WWII. In fact, you might use A Child’s First Book of American History as a supplement rather than your primary resource with students in middle school even up into high school. For children who will be studying U.S. History again before high school in some fashion, the coverage is fine without supplements.

Most stories are just the right length for reading in a single session, although some might be better read over two sessions. While children about fourth grade and above should be able to read the book on their own, the writing style really lends itself to dramatic reading aloud. Here is a brief example from the story of "The Quest for the Seven Cities." It begins,

After six hundred years of fighting the Moors, Spain faced bankruptcy. A miracle was needed to save the country from financial despair, but in Spain fantasy often passed for truth. One such fantasy was the island of Antillia. No two map-makers could agree where in the unexplored oceans this island could be found, but all believed that whoever reached Antillia would find the fabulous Seven Cities (p. 25).

While there is an index, there are no end-of-chapter questions or other textbook features. However, Beautiful Feet's Early American History: A Literature Approach, Intermediate and Modern American and World History: A Literature Approach, Intermediate both use A Child’s First Book of American History as a spine. Those guides include study notes, questions, and answers for the book.

A Child’s First Book of American History is one of the few children’s history books that you might want to buy in the hard cover edition because you will probably want to hold on to it forever.

You can click on our affiliate links below to purchase directly from the publisher and help support this website.
Paperback edition
Hardback edition