A History of the United States and Its People 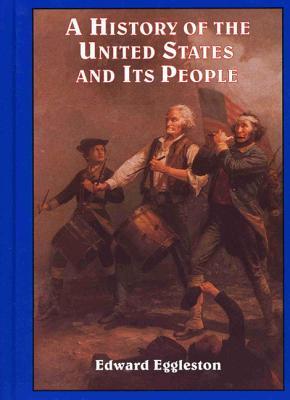 A History of the United States and Its People was written by Edward Eggleston around 1890, so it covers exploration and colonization up through the nineteenth century. The terminology and attitudes reflect those common in that era—there are occasional references that would not be considered politically correct today. This text covers culture as well as wars and political developments. It is generally chronological in order, but it doesn’t try to cover all events happening at any given time within the same chapter. Instead, chapters are topical such as chapters on “Quaker in the Jerseys and Pennsylvania,” “Early Struggles for Liberty in the Colonies,” and “How the Great Civil War Began.” While it doesn’t use a storytelling approach, it does make connections between people and events. This approach was probably a reflection of the fact that Eggleston was a novelist before he began to write history texts. The result is a history that is more interesting to read than most that you might use for students in grade 6 through 8.

Published as a hardcover book by Lost Classics, it has numerous interestingly detailed, hand-drawn illustrations, portraits, and maps. The book itself is just under 8” x 6” and is fairly easy to handle. While the book is over 400 pages in length, the text for each chapter generally runs no more than five pages, so the reading is very manageable. Each chapter concludes with a lengthy set of “Questions for Study” that might be used for oral or written responses. In addition, you might find at the end of any one chapter some of the following: outlined topics listed under “Study by topics” that might make great starting points for brief essays, geography activities, possible blackboard illustrations, composition assignments, and, periodically, a topical outline of a preceding group of chapters that is intended to help with reviewing material from earlier chapters.

The font size for the text is an appropriate size, but a much smaller font is used for the Questions for Study and the occasional sidebar. The small font might prove difficult for those who have trouble reading small print.

There is no answer key, so a parent or teacher would need to read the text to determine answers. The Questions for Study are primarily recall questions that have predictable answers that can be drawn from the text. A thorough index should prove helpful for finding answers as well as other purposes.

Unlike many texts popular in the homeschool arena, this U.S. history devotes less attention to religion. It does discuss Puritans and their beliefs, the Separatists and the conflicts that drove them from England, the settling of Maryland by Catholics, and other topics, but it doesn’t cover revivals or key religious figures such as George Whitefield.

Because this text covers only through the nineteenth century, you will need to use another resource to provide more complete coverage of U.S. History up through the present.

This is the third of three history texts by Eggleston. The other two are Stories of Great Americans for Little Americans and A First Book in American History.

History of the United States & Its People