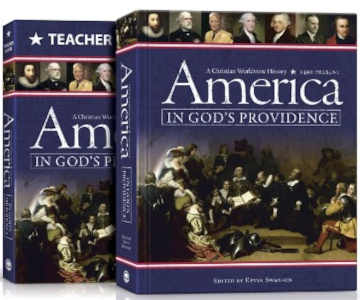 America in God’s Providence is a high-school course for American history that is written from a Christian worldview based on Reformed-Protestant beliefs. The course consists of a 1,011 page, heavily illustrated, full-color textbook and a 333-page teacher guide (that has within it the student workbook). The textbook is available as either a hardcover book or a PDF, and the teacher guide is available as either a softcover book or a PDF.

The teacher guide presents schedules for using the course over either one or two years. Depending upon how you use it, students can earn either one or two course credits. Given the size of the textbook, the amount of content, and the weighty ideas presented, I definitely recommend taking two years to complete the course and giving students two credits.

The textbook combines material from what were previously three separate textbooks (written primarily by Gary DeMar) with an equal amount of new material written by Kevin Swanson, who also edited the entire course. The material adapted from the original three textbooks now makes up the first three of seven units in America in God’s Providence. These three units cover influential events, people, and ideas from ancient times up to the year 1800. Swanson’s material continues up to 2018 in the last four units.

The content of the textbook is very interesting. Rather than a dry recitation of names and dates, it delves into motivational issues related to beliefs and values that drive men to either noble or despicable deeds. A fundamental assumption of the course is that the discovery and founding of America happened through the providence of God, even though some of those who were key to those events did not believe in or honor God.

On page 18 of the textbook, it says, “The study of history is the study of how nations have answered the following questions of allegiance: Who is ultimately in charge? and Whose law should be obeyed?” With those questions in mind, the authors frequently analyze the faith of key historical figures. The early-Christian writer Tertullian is praised as having “stressed that the biblical worldview must serve as the standard in evaluating all competing worldviews” (p. 26). Since the primary focus of the course is U.S. history, it often discusses the conversion of men such as Sam Houston (p. 592) and Nathan Bedford Forrest (p. 688) who had led scandalous or wicked lives prior to their conversion. At the same time, it sometimes describes some American leaders who have long been thought of us Christians as having abandoned a Reformed Protestant orthodoxy or essential beliefs of Christianity. One example of this is the sidebar titled “Abraham Lincoln’s Lapse of Faith” on page 636.

The text also advances the idea of limited government, although it can’t be labeled as supportive of political conservativism. Approaching the concept from a religious perspective, the authors are critical of both major political parties regarding overreach by the federal government. Chapter 48, “A New Nation Forms in 1865,” points to a fundamental shift from perceiving the U.S. as a collection of individual states (each like a country) to one country controlled much more heavily by the federal government. Further, it says, “The Federal Government would eventually turn into a socialist welfare state….by the end of the 20th century” (p. 667).

The textbook is heavily illustrated for a high-school level book. The images add visual appeal and information while also cutting down the amount of text for students to read. This is important to note about such a large book. Sidebars on most pages add essential and fascinating detail; do not skip these! In addition, timelines at the bottom of most pages help students keep the relationships between events in mind.

This textbook dedicates the entire first unit to historical background information and the explorations that were crucial to our country’s foundations. The idea of worldviews in conflict is introduced at the beginning of Chapter 1 and remains a central theme throughout the textbook. The second unit continues with the settlement and development of the colonies, but always with an eye to religious development and influence. The third unit broadens out to provide excellent coverage of the period leading up to the American Revolution and continues to the end of the 18th century. The fourth unit is about the growth of the country, the advance of secular humanism, westward expansion, the plight of Native Americans, and the problem of foreign entanglements. The fifth unit, titled “A Severe Judgment Visits the Nation,” covers the period leading up to and through the Civil War. The sixth unit, “The Zenith of the Empire,” talks about the growth and successes of America along with the simultaneous loss of faith. It also covers both world wars as well as the growth of socialism in America. Unit VII, “Proud Nation Before a Fall,” paints a bleak picture of modern history, reflected in chapters with titles such as “The Foundations Destroyed: An Explosion of Immorality” and “A Nation Humbled.”

There are some distinct differences in style between the first three units (based on material from three previous books) and the rest of the book. The first three units use more of a storytelling approach than do the rest of the units. In addition, many of the titles for the sidebars and the subsections of the textbook are puns in the first three units. For instance, “Are You My Mother?” is the title of a sidebar about pagan worship. “Jamestown’s ‘Lucky Strike’” is the heading for a section about the cultivation of tobacco as a profitable crop in the Jamestown colony—playing off the name of a brand of cigarettes. And “Going Dutch” heads the section about the Separatists deciding to move to Holland in search of religious liberty. The puns disappear in the last four units.

The teacher guide for this course combines course planning and course administration information, student-workbook pages, tests, and answer keys. The pages in the printed teacher guide are perforated and three-hole punched to enable you to easily remove pages and separate parts of the book as needed. The PDF version also makes it easy to give students only what they need.

A few pages at the beginning of the teacher guide briefly explain how the course works and how to grade assignments. This is followed by almost 40 pages of charts showing different possible schedules. For each day, the charts might show one of the following: a reading assignment, questions to be answered, an optional project, or an exam. The charts include columns for recording due dates, checking off completion, and entering grades. Following the student-workbook pages are answer keys for the discussion questions, tests, and exams.

The textbook for this course has lists of key terms and people for each chapter, but explanations and descriptions for each of these are found together only in the student-workbook pages.

Each chapter's student-workbook pages include a set of discussion questions. While students might discuss the questions, there is also space following each question, indicating that students might be writing out their answers. (It doesn't specify whether questions are for discussion or written responses.) The space is not large enough for some of the answers, so you might have students write them on a computer or in a separate notebook.

Periodic tests cover groups of chapters. The tests present definitions or other identifying information for the terms and people that students should have learned for each chapter. For instance, Test 25 includes this item: “The war in which the US sent troops into Kuwait to engage with Iraq.” The student needs to answer, “First Gulf War.” The test items don’t use wording identical to that presented when students first learned the terms (or people's names) and their descriptions, and students do not have a word bank from which to choose. So these tests challenge students to come up with the proper term or person’s name from their memory. Each test also includes one essay question.

All seven units have a final exam, again with only the descriptions to identify, but not the terms or names. There are 47 to 100 of these per exam, so the tests are very difficult.

The America in God’s Providence course is an excellent choice for those who want to teach history from a Reformed Protestant worldview.