Land of Hope: An Invitation to the Great American Story

The textbook relates the history of the United States in a clear-eyed fashion while stressing the great opportunity and positive effects of our country’s unique experiment in self-governance. Author Wilfred McClay says in his introduction (p. xi) that the primary objective of the book is "to offer to American readers, young and old alike, an accurate, responsible, coherent, persuasive, and inspiring narrative account of their country─an account that will inform and deepen their sense of the land they inhabit and equip them for the privileges and responsibilities of citizenship."

The textbook Land of Hope is very well written in a narrative style that makes it easy to read. Here’s a sample from the conclusion of Chapter 17: The New Deal on page 315.

How quickly his [President Franklin D. Roosevelt’s] fortunes had turned. After November 1938, there would be no more Hundred Days explosions of legislative activity. Roosevelt’s New Deal had made dramatic and permanent changes in the landscape of American life and had eased the effects of a very great economic calamity. His spirit and his words had restored the nation’s spirit. But his policies had not solved the problems of the economy and had not returned the country to full employment. It would take, not the moral equivalent of war, but war itself to accomplish that.

Aside from a few maps, there are no illustrations in the textbook. While the book is mostly text, it doesn’t seem intimidating or overwhelming because it’s such an entertaining read. I think Land of Hope is just the sort of textbook that would appeal to many homeschoolers. It doesn’t promote a particular religious viewpoint, but it is respectful of religion and mentions some religious developments of historical significance. While it leans slightly to the right on the political spectrum, it takes a fairly even-handed approach to political parties and competing political viewpoints. This is especially evident in Chapter 22 where he discusses the presidents from George H. W. Bush through Donald Trump, the War on Terror, and other politically charged events in a relatively unbiased manner. 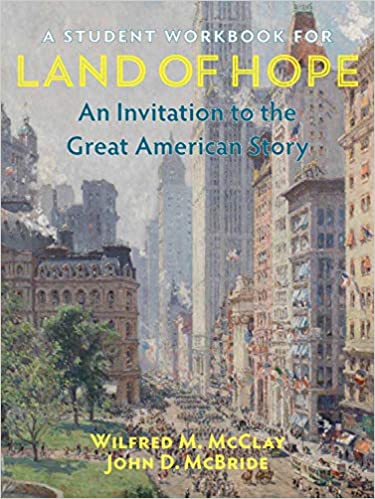 The student workbook, co-authored by Wilfred M. McClay and John D. McBride, is almost the same size as the textbook since it is loaded with so much material. For each chapter of the textbook, it has questions that might be used for writing assignments or discussions, other questions that students should answer independently, one or two primary source documents, and study questions for the document(s).

Some of the questions are designed for students to simply fill in the blanks. Others require answers that might be a word, a sentence, or a paragraph. For instance, nine of the twenty-one questions for the first chapter are fill-in-the-blank questions. The other twelve questions are a mixture of some requiring brief answers, some that require complex answers, and some that consist of one or more follow-up questions. The latter two types of questions lend themselves to discussion, although students could write out their responses. Some questions ask students to present their opinions and provide reasons for those opinions. For example, page 251 has a question that asks, "Was Bill Clinton's presidency a success? Why or why not?"

For some chapters, there are an unusually large number of questions, and almost all of them could be used for discussion or written responses. For instance, Chapter 19 on the Cold War has 48 questions, only a few of which have students fill in the blanks. Teachers might need to be selective about which of these questions to have students answer since it could be very time consuming to answer all of them. In addition, each chapter has one to five objective questions where students will either number events in the proper order or match items displayed in two columns.

The one or two source documents included for each chapter include The Mayflower Compact, Thomas Paine's Common Sense, The Federalist: 10 by James Madison, Abraham Lincoln's Speech on the Dred Scott Decision given on June 26 of 1857, The Fourteenth Amendment to the Constitution of the United States, Woodrow Wilson's Fourteen Points, and Martin Luther King Jr.'s speech, "I Have a Dream." The documents are each followed their own set of about six questions that can be used for either written assignments or discussion.

Near the end of the student workbook are twelve map exercises consisting of detailed instructions and the maps on which students will write. Two additional maps of the United States are included along with a number of suggestions for assignments.

At the end of the book, a section titled Supplemental Materials includes a number of resources. Most important among them are The Declaration of Independence, The Constitution of the United States (including the Bill of Rights and all amendments), and a Table of U.S. Presidential Elections. Four special units in the teacher's guide show how to use these resources.

The teacher's guide is, again, almost the same size as the textbook. It has a summary of each chapter and suggested answers for the questions that have predictable answers. It includes the page numbers in the textbook where students might find what they need to answer questions. The chapter summaries might be sufficient for a teacher to lead a discussion of the questions, but reading the entire chapter will certainly provide better preparation. Teachers (or parents) with students working independently can oversee the course without having to read the entire textbook—but they might have to read some of it.

The teacher's guide does not have the complete textbook content, but it does have all of the questions. I could not find any mention of the map activities that are found in the student workbook. Teachers should note the chapter to which each map activity applies and be sure to assign them at the proper time. (Nothing in the teacher's guide alerts you to this.)  While teachers can function without their own student workbook, they will need to consult one for the map activities, and they should have their own copy of the textbook.

Hillsdale College has created a free, online course for the textbook titled The Great American Story: A Land of Hope. This online course with lectures transforms the Land of Hope textbook into a complete course. The online course makes Land of Hope an excellent and practical choice for homeschoolers. However, it does not offer the breadth of questions and the primary source documents available with the teacher's guide and student workbook.

In the textbook’s epilogue on page 423, McClay says,

This book is offered as a contribution to the making of American citizens. As such, it is a patriotic endeavor as well as a scholarly one, and it never loses sight of what there is to celebrate and cherish in the American achievement. That doesn’t mean it is an uncritical celebration.

He goes on to say that he wants to see open and honest discussion of differing views and that this discussion needs to be based on love for our country, despite its faults. McClay is not blindly patriotic, but he values what we’ve got in comparison to most other countries. It seems to me that homeschoolers who want their children to learn to appreciate the blessing of living in the United States, while also learning that it's not perfect, should find Land of Hope an excellent resource to accomplish that.

A Student Workbook for Land of Hope: An Invitation to the Great American Story

A Teacher's Guide to Land of Hope: An Invitation to the Great American Story

Land of Hope: An Invitation to the Great American Story