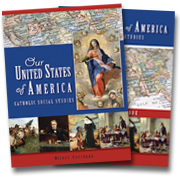 Our United States of America Catholic Social Studies course is recommended for fourth grade students. It serves as an introduction to U.S. History, but it uses a “regions and states” approach that makes it particularly suitable for the year in which you want to study your state’s history.

The gorgeous 210-page textbook is heavily illustrated with both images and graphic design. Although it is a softcover book, pages are printed on high quality paper that should be fairly durable.

While the text covers many major events in U.S. History such as exploration and settlement, the Revolutionary and Civil Wars, and the westward movement, this text seems to me somewhat of a “teaser” in that it presents very selective coverage of interesting people and events rather than trying to cover everything. What it does cover is often told in story form, in relation to modern day people or events with which children are familiar, or as surprising facts. While it’s not a “living book,” it is much more interestingly written than most history texts for fourth grade level.

An introduction provides some general historical background and basics on our country’s system of government along with a topographical map of the United States. The rest of the book is presented in four units covering four regions: northeastern, midwestern, southern, and western. Each region is further subdivided into sub-regions such as the mountain and pacific regions within the western region. There are an overview and map for each of the four regions, and yet another overview for each sub-region. Within the sub-regions, students learn about each individual state, including geography.

State information often includes some “basic facts,” but that information is woven in with more interesting content. There might be one or more stories about the state’s settlement and development, discussion of a key event, biographical sketch of a key person, discussion of major events in U.S. History that are directly connected to the state, and historical or modern day curiosities such as Six Flags theme parks relation to Texas’ history.

For many states there are two pages devoted to a topic that highlights the state’s “Catholic Heritage.” For example, Alabama’s Catholic Heritage highlights the story of Mother Angelica and EWTN while Colorado’s Catholic Heritage tells the story of Sister Blandina Segale who confronted Billy the Kid and obtained mercy for a town because she had helped to save the life of Billy’s wounded fellow outlaw. There are also a few sidebars such as one that tells about the Trail of Tears, concluding with the interesting fact that Archbishop Charles Chaput, a descendant of the displaced Indian tribe the Potawatomi, “was the first person of Native American heritage to be elevated to archbishop.” (I, personally, learned about many past and present Catholic heroes with whom I was not familiar while reading through this book!)

There are occasional “Mysteries of History” features that explain an event then urge students to use the information as clues for further discovery. This is tied to the use of the “Five W” Clue Words—who, what, when, where, and why—that students are taught to consider beginning on p. 2 of the text and p. 12 of the workbook.

The Clue Words are only one aspect of thinking skills development throughout this course. Exercises and assignments in the workbook vary greatly. There are comprehension questions and quizzes for each region with matching, multiple-choice, fill-in-the-blank, and the occasional full-sentence response questions. But there are also “Map Challenges,” “Mapping the Economy,” and “Put on Those Thinking Caps” assignments that stretch students beyond superficial facts. For example, there are questions that challenge students to consider facts they have learned about a state and its major products then consider how geography and other factors might explain why certain products would or would not be produced there.

As you might have surmised, students learn quite a bit of geography in this course. Students fill in outline maps and also learn to draw maps from memory. They also learn about climate, geography and natural resources. The integration of geographical knowledge with what they are learning about both the past and present of each region or state teaches geography in a very effective fashion.

The last third of the student workbook is to be used for a study dedicated to the student’s own state history. This study encourages field trips and hands on learning as well as internet and library research. Students will create a binder for their assignments and some of their projects. Students will complete worksheets as well as write their own reports and create their own maps. The study concludes with an oral report on their state. Thorough instructions and activity pages are included for this. At the end of the student workbook is an answer key.

The Catholic character of this study is unique and extensive. While not all of the famous people covered were (or are) Catholic, Catholic heroes receive a lot of attention. Prejudice and injustice toward Catholics throughout much of our country’s history is revealed. But more emphasis is on the positive impact of the Catholic faith and Catholic action in our country’s history.